Wildlife crime takes many forms, some of which involve extreme cruelty.

The main wildlife issues we are actively involved in combating include:

If you suspect a crime has occurred:

Cheshire Police investigate crimes involving badger digging, illegal trapping, snaring or poisoning. All badgers and their setts are protected in law by the Protections of Badgers Act, 1992. Anyone who takes, kills, or injures a badger or interferes with a badger sett, can be jailed for six months or fined up to £5,000.
Under The Wild Mammals (Protection) Act 1996 it is an offence for a person to inflict any unnecessary suffering on a wild animal by acts including crushing, kicking and beating.
Police officers can deal with incidents relating to animal cruelty. Although we often liaise with the RSPCA and RSPB, we can prosecute for animal and bird offences.

Hunting remains a very emotive issue, but Cheshire Police treats it no differently to other public order situations. Our priority is always to minimise the impact of any disorder that does occur, and to reassure the communities involved.
The continuation of hunt meetings is not illegal, unless the Hunting Act 2004 is breached. A person commits an offence if they hunt a wild mammal with a dog.
There are various activities that may appear to be hunting, which are in fact not breaching the Hunting Act 2004. These include trail hunting, hound exercising and flushing to guns. In addition, the hunting of rabbits and rats is not illegal if it takes place on land owned by the hunter or the hunters have the landowner’s permission.
It is not a police matter to determine what is or is not hunting. This can only be determined in court. The role of the police is to investigate alleged or apparent breaches of the Hunting Act, to gather evidence, and to pass that evidence to the appropriate authority to consider prosecution.
We encourage hunts to continue to inform the police of the intended times, dates and venues of legal meetings. In addition, we rely on members of the public to provide community intelligence about meetings where disorder may occur or where the Hunting Act may be breached.

All British birds, their nests and eggs are protected under the Wildlife and Countryside Act 1981, although there are a number of 'pest species' that can be controlled under certain conditions by authorised people. Offenders may be liable to a fine of up to £5,000 for each bird involved or up to six months imprisonment.

Certain rare animals, such as the water vole and otter, are also protected by this Act. Bats and great crested newt receive special protection under European legislation. Offenders may be liable to a fine of up to £5,000 for each animal involved or up to six months imprisonment.

Apart from their aesthetic value, wild plants are an essential part of the environment. They provide food and shelter and without them, insects, birds and other animals would be unable to survive.
All wild plants found in this country, are given protection under the Wildlife and Countryside Act 1981, which makes it illegal to uproot them without permission of the landowner.

Endangered species, such as some parrots and tortoises, are protected under The Control of Trade in Endangered Species (Enforcement) Regulations 1997. They can only be sold legally if the seller is in possession of a licence issued by the Animal Health Agency. If you are considering buying a tortoise or any other endangered animal, you should only do so from a reputable breeder and you should ask for a copy of the licence.
Posted by Jan Wright at 12:12 AM No comments: 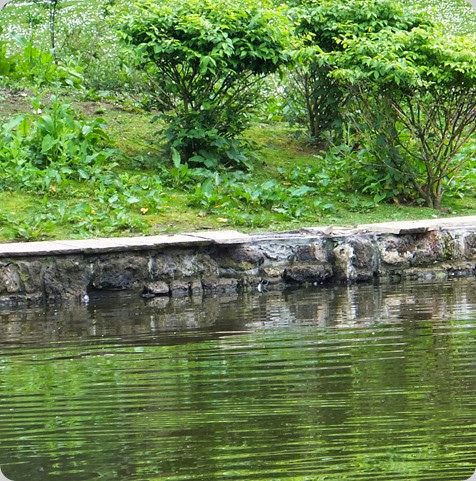 The island were they put the boats at night is suffering damage from the boats smashing into the stone work with a lot of the top slabs destroyed by the boats. So this will be another restoration of restoration. 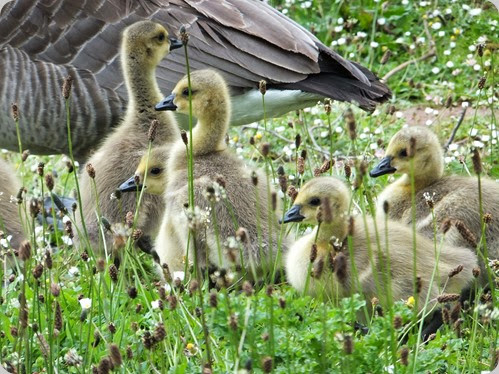 More babies in the park this time Canada Geese there is now a lot of ducks and geese with babies. 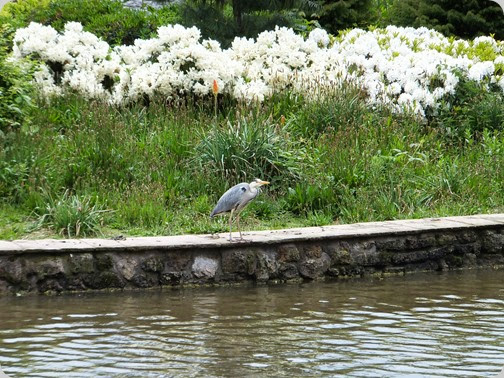 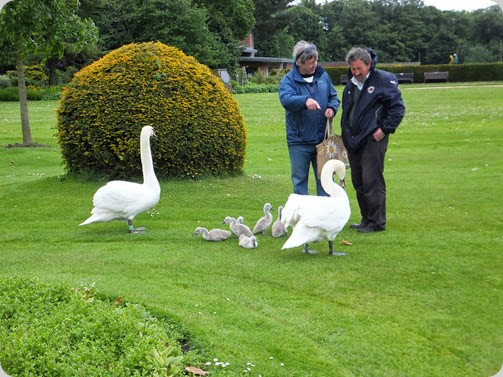 members of the parks wildlife group are keeping a close eye on the swans and babies. A witness saw a man on a bike with  a grey hound type of dog off the lead attack the signets this week luckily they were close to mum and water and escaped but the dog followed them into the water. Being in the water the swan was able to defend her young. Last year the baby swans disappeared in mysterious circumstances  so we are trying to keep watch over them this year. If anyone sees any thing happening to a swan call the Police straight away 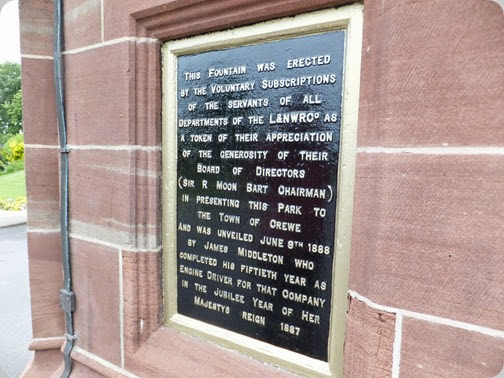 The plaque on the clock tower has now been renovated 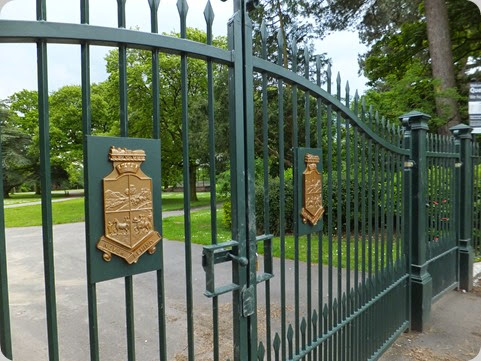 Some improvements have gone on this week with all gates getting the shields which dont seem to make much sense as they show canal boats on them? 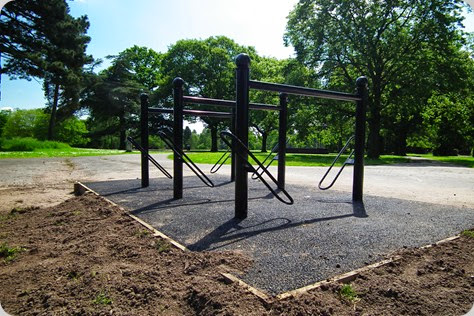 New bike stands up near the bandstand which were put on the playing field then removed and put in the park they must have had the map upside down. 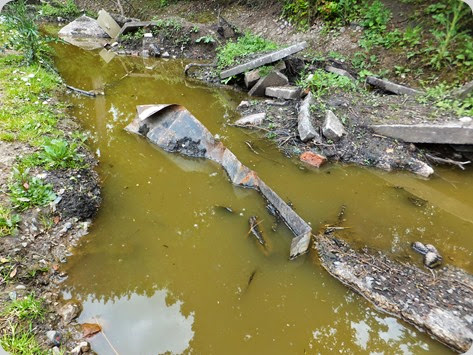 At the end of the lake were there is a mini lake the council have chucked rubbish in it for what purpose I dont know as its just dumped there and just make it worse not better. What is a muddy hole full of water has now been turned into a death trap. You can see there is rusty metal that is razor sharp so fall on that or catch it with your leg and it could cut you in half, add to that the concrete and its a lot more dangerous than if they had left it alone 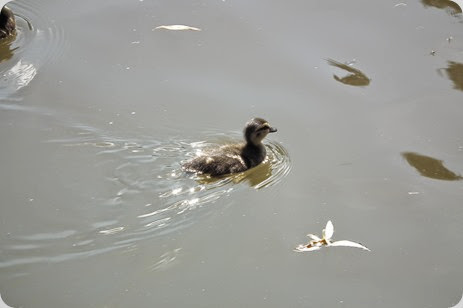 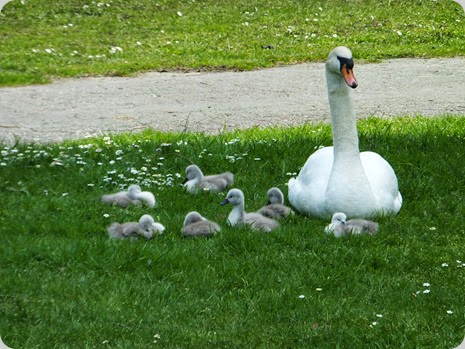 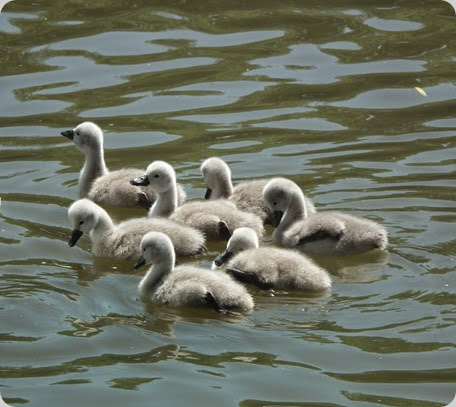 The babies are sticking close together in the water lets hope this year they survive as last year they got a few months old and after being hooked by fishermen the last 3 disappeared in mysterious circumstances. As a swan and eggs have been removed from a local site we need to keep our eye out for anyone messing with them. 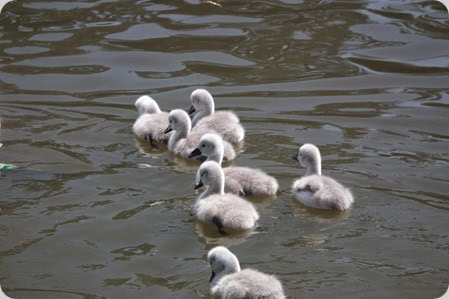 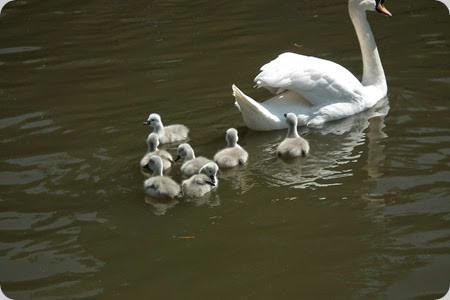 Having a swim with mum 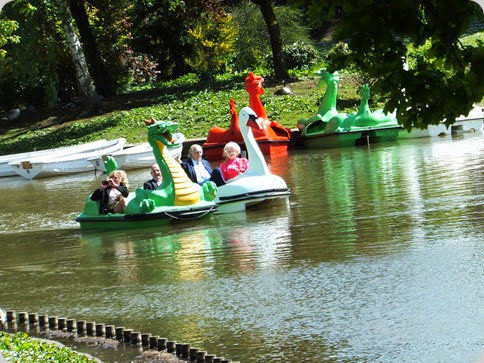 The Mayor Cllr Dorothy Flude  came for a ride on the boats in the park this week. We are having major problems with the boats not being supervised. The first incident were people using the boats to run over baby ducks and chase them around the lake while staff did nothing. There were then two separate incidents reported by the fishing bailiff and seen by others. These are serious problems that rowers got near the far side of the island and messed with eggs on a gooses nest. On the second occasion they threw the eggs and smashed them. If it had been the swans eggs they could face prosecution. Again on all these occasions staff did nothing they must supervise these boats and walk round to see none of this type of behaviour happens. They are making lots of money from the boats so they must protect wildlife and stop vandalism. 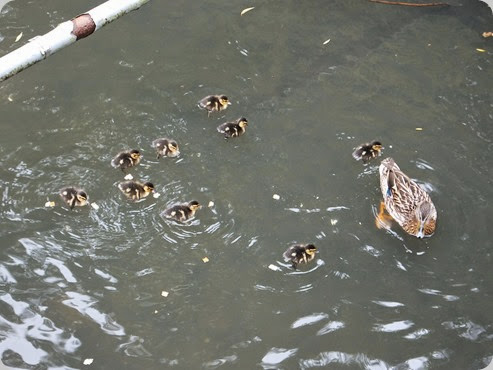 Its a major wildlife week this week with 7 baby swans being born. Last year was the first year we had young but none survived so this year is a bumper year. There are baby ducks one has 12 babies another with 5 and one with 4 but these tend to loose a lot to gulls and dogs. There have been idiots with a black dog letting it chase duck on Sunday. 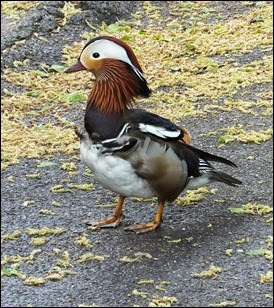 The Mandarin everyone's favourite is back again this week 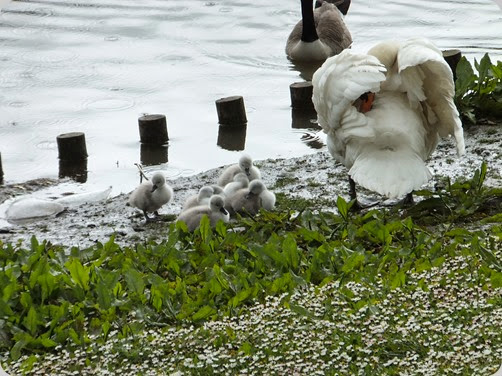 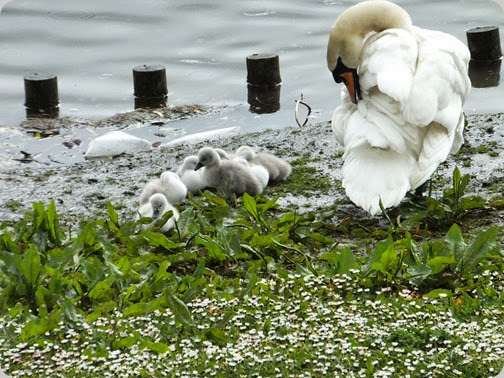 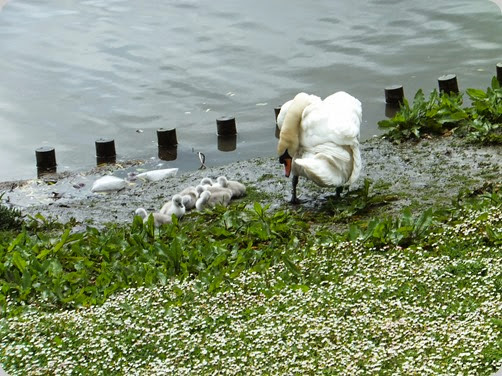 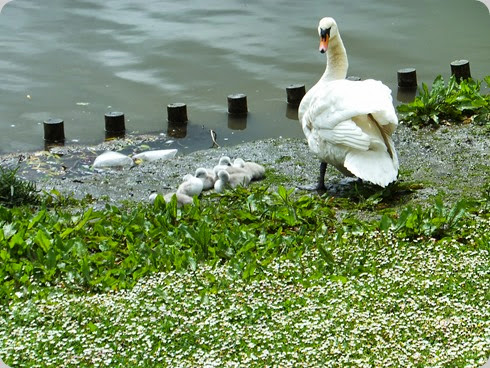 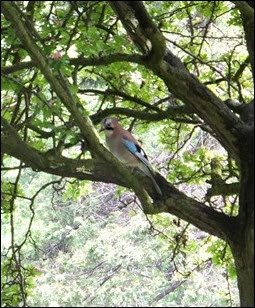 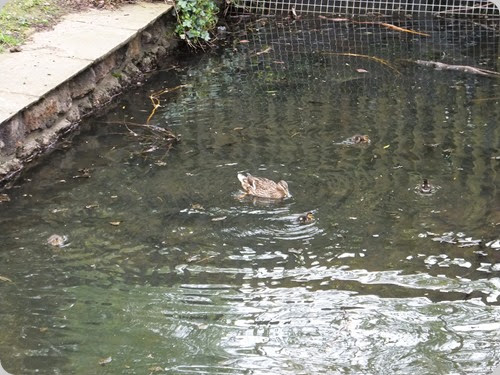 The first baby ducks appeared this week with the mother of 5 chicks swimming around. How long will they last as people watched on Sunday as kids in a boat chased them all over the lake trying to run the chicks over and the staff never saw anything. The boat have duel hulls so they can run   them over and kill them with the paddle blades 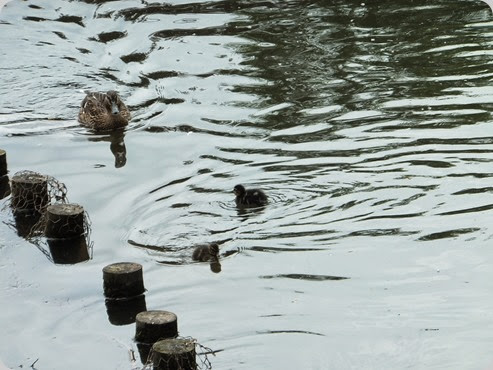 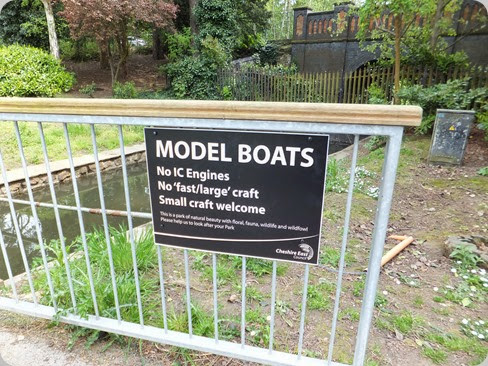 An obscure notice went up by Tipkinder bridge were no one will see it but what does it mean? how fast is fast how large is large how small is small It defines nothing total waste of money 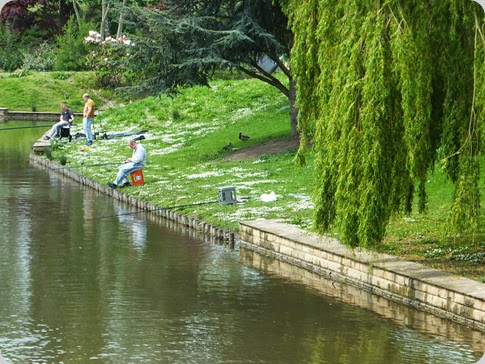 Once again fishing gives problems spot the illegal activity above. This is often happening and highly illegal leaving a rod unattended and often its happens while the fisherman goes to relive himself in the bushes which is also illegal. The offence is worse in the park   as should a swan or wildlife be caught in an unattended line it could drag it all around the lake and suffer a lot of pain and suffering. It now closed season but that didnt stop 7 fishing anyway. Its up for review at the next friends meeting and so far there hasnt been a lot of fishing due to the weather etc so given all the problems once kids are off school they arnt going to cope 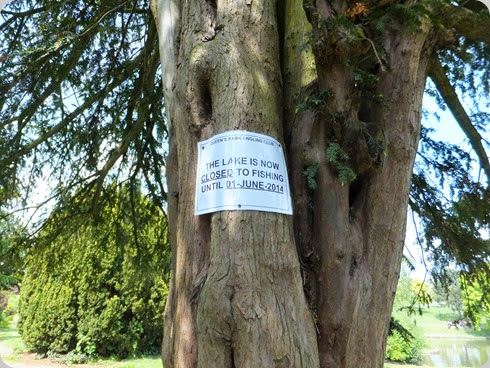