Save the Queens Park Wardens

I wonder if anyone knows that from June there are no Park Rangers. One sadly passed away a few months ago and there are no plans to replace him, another has already been made redundant and the third retires in June and again there are no plans for a replacement. I also believe that the external security company brought in by the Council to add additional security when the ranger's are off duty has also had the contract cancelled. An open invitation for all the undesirables to wreck all the good work in a very short space of time. I wonder if the Heritage Lottery hierarchy are aware of this. I would have thought that there were conditions attached to the bid that required the Council to commit staff to protect the park!

The wardens carry out many task open and shutting the park, controlling yobs and security, provide first aid, ensure any events have all they need to be able to carry out the event. They keep the park clean report faults and many other functions.

If they go the 6.5million spent will rapidly go down the pan as yobs start wrecking the park. What if you are taken ill or have an accident who will be there to save your life?

Its hard to see how they can be made redundant as someone must perform these task and if anyone does then the Wardens haven’t been made redundant but have suffered wrongful dismissal. To make someone redundant the job most have gone. Its not clear what the intentions are for the Queens Park but there was talk about leaving it open 24/7 while this may work in other posh areas in Crewe it will be wrecked within a week. Why spend 6.5 million to get the park right and then leave it to yobs to wreck.

The cost of the wardens is a drop in the ocean and not great saving are to be achieved by this move. Everyone is up in arms that knows about this and I visit the Queens Park daily and everyone is against loosing the wardens this could be the election big issue.

Easter in the Queens Park 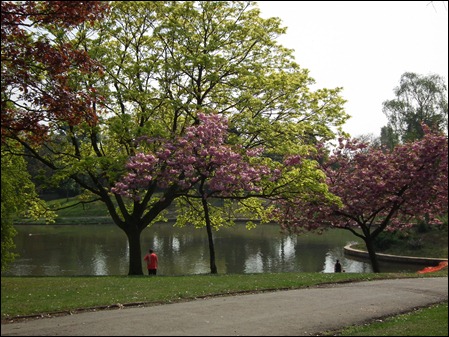 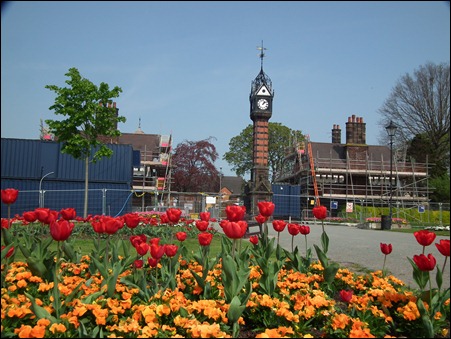 Moving on the Bowls pavilion is now close to completion with the roof and the main structure now done. Even the windows are now in place 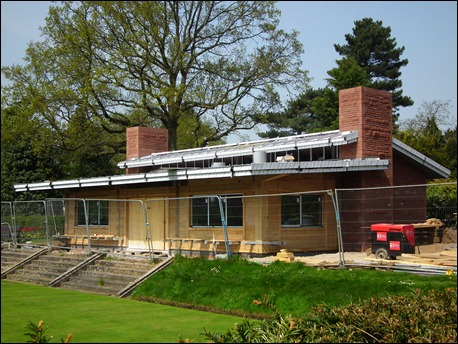 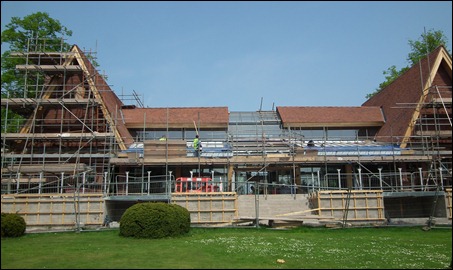 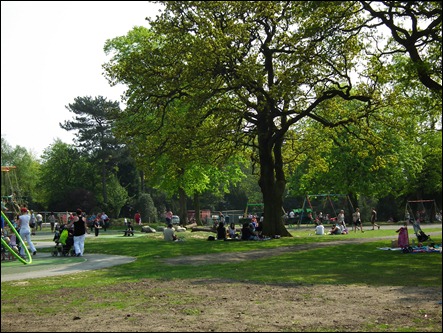 The sun and holidays has brought people out to the park with train rides and bouncy castles being on site for the kids. We have had a good week weather wise and more sun is forecast for the Easter weekend 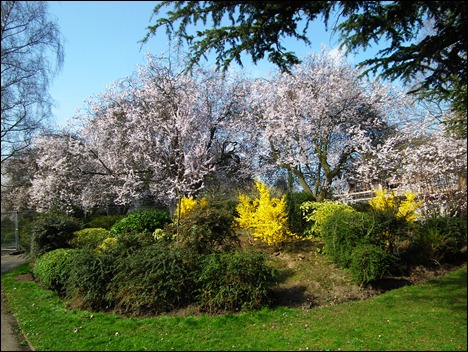 All I have heard this week is complaints from people about the cutting down of trees by the new cafe. The above picture was taken last week. 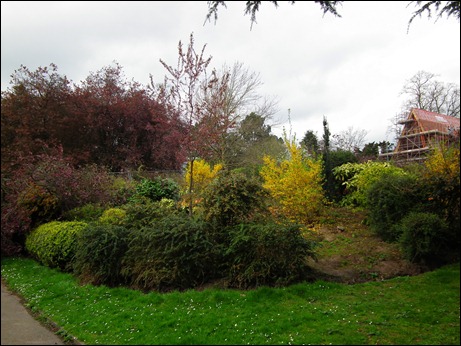 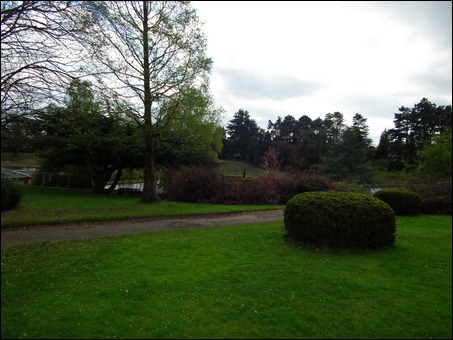 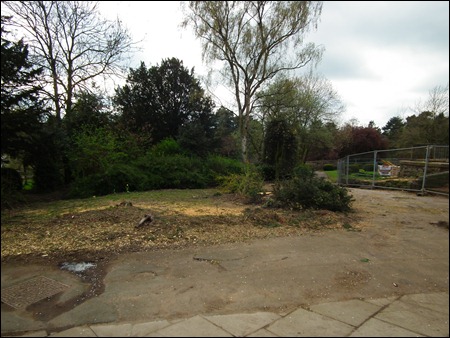 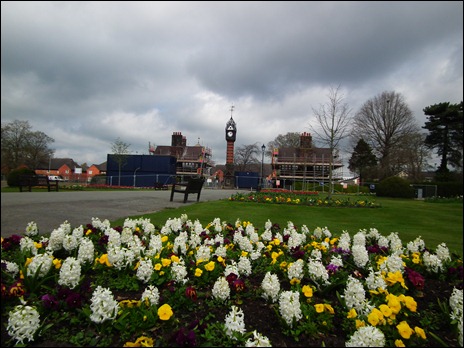 In the main drive way the sprig bedding its looking good in the sunshine. 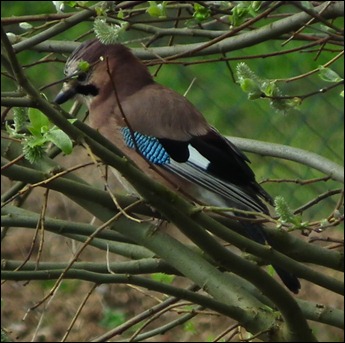 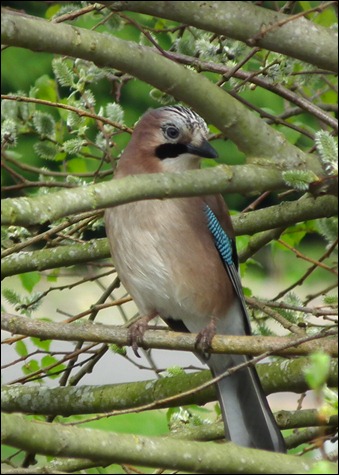 Posted by Jan Wright at 1:06 AM No comments:

Tree Felling at the Queens Park 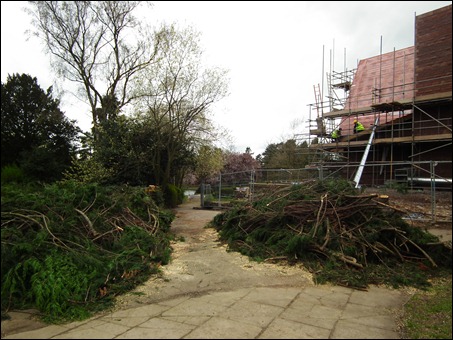 There has been a few complaints this week about what's happening at the park. Firstly a lot of trees are being removed by the new cafe and by the lake so you can get a betters view of the lake etc from the new cafe. About 6 have already been felled and there are more to come. Many people don't agree that trees that have been around for year should be felled in this way what do you think?

The second problem is that one of the park keepers is finishing in June and wont be replaced and there has been discussions going on if the other park keeper will have to go. How the park will be protected and who will be there to help people is still open to debate. Having spent 6.5 million on the park don't we need someone to look after it and be there to help?

Thirdly its believed that firm who have done the cycle track to Nantwich have agreed to do the main paths in the park on condition bikes can go in the park. Again many fear the BMX will then come in and put people in danger. While sensible bikers maybe fine what about idiots? 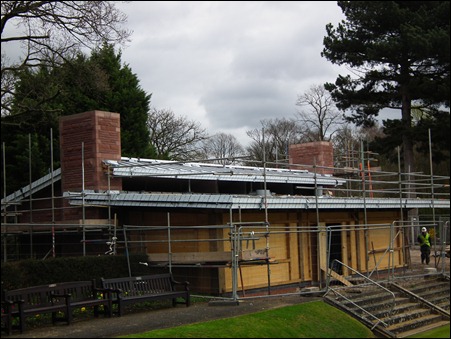 The bowls hut is getting close to being finished as a new Zinc roof goes on and the main veranda is now in place. Lets hope its open for the new season. 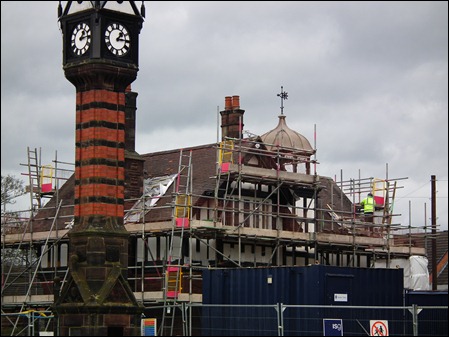 The lodges are having a roof maker over as you can see. As a lot of the work is behind covered safety sheets there is not a lot to see. 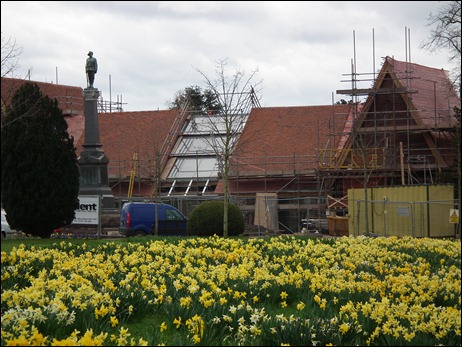 The cafe roof is now not far off being done its seems to have taken forever to do the roof but its now looking good with all the daffs out(wonder how many will be left after mothering Sunday). Once the roof is done there isn't a lot of work to do inside as its a big open space.

The Boar war work has ground to a halt at the moment.