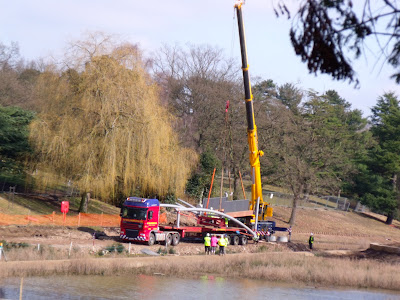 The Burma Star Bridge – the second largest landmark bridge in Crewe’s Queens Park – was hoisted into place on Wednesday (March 17)
From 11am onwards, A 300 tonne crane lifted the 22.5 tonne bridge into place.
The Burma Star Bridge – named so after the Second World War Campaign in the Burma jungles – will arch over the Burma Star Island and Memorial, which is also undergoing renovation.
It’s all part of a £6.5m restoration of the park, thanks to the Heritage Lottery Fund. Eventually, the 45-acre park will house five impressive bridges.
Councillor Andrew Knowles, Cabinet member with responsibility for parks, said the special occasion was close to his heart.
His uncle, James Knowles, who served as a Chindit during the Burma campaign, died in 1944 aged just 20 years-old. To this day, Andrew has kept a medal he won as a keepsake.
He added: “This will be an important part of Crewe’s history when this bridge finally settles into place.
“This incredible Victorian park is slowly being brought back to its former glory thanks to Cheshire East Council and its funding partners, as well as all the help and support from members of the public who have been extremely patient during renovations.”
The Burma Star Bridge is a tribute to the Burma Star Association who refer to themselves as the “Forgotten Regiment”.
The Burma Star Association was officially founded on the 26 February 1951, with 2000 founder members who exist to promote the comradeship experienced during the bitter fighting in the jungles of Burma, as well as help members and their families in times of ill-health and poverty.
The Association has representatives from the Royal Navy, Army Royal Air Force and Royal British Legion on the National Council. 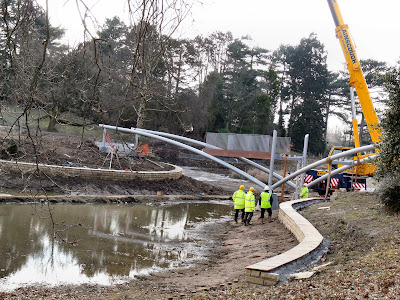 The bridge being lifted with the steel work. Most of the work was done by 3pm but the second part of the bridge hadn't arrived at that time

What the bridge will look like when the lake is filled 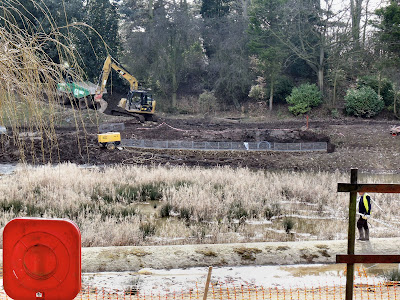 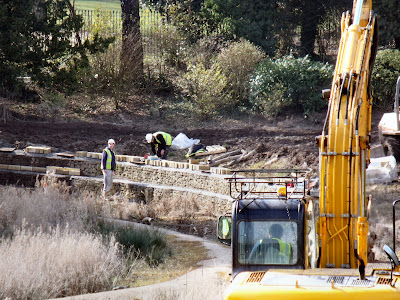 Further down the new wall by the golf coarse was cracking on as well.

More pictures soon as there is a lot happening at the moment
Posted by Jan Wright at 11:31 PM