The original programme from the opening of the park 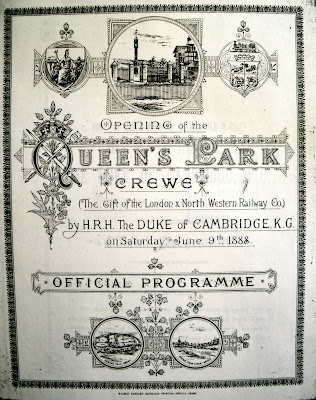 The Duke of Cambridge!
ON THE 9th JUNE, 1888.
©fficial programme
RECEPTION.
His Royal Highness and Suite are expected to arrive by special train at the Locomotive Offices of the London and North-Western Railway Company, at Crewe, about 1.20 p.m., and will there he received by Sir Richard Moon, Bart. (Chairman of Railway way Company), and the Mayor and corporation of Crewe.
IP
"A" Company of the 2nd Cheshire (Railway) Engineer Volunteer will furnish a Guard of Honour at the point where His Royal Highness will alight.
At 1:30 His Royal Highness and the invited Guests will be entertained at Luncheon by the Chairman and Directors of the London and North Western Railway Company. During the Luncheon, the Crewe Strain Shed Band will play a Selection of Music.
PROCESSION TO THE QUEEN'S PARK-
After Luncheon (about 3.(1 p.m.) a, procession will be formed, which, in addition to His Royal Highness and Suite, and Lord Napier of Magdala, will consist of the Chairman of the London and North Western Railway Company, the Major and Corporation, and other Visitors. For these, carriages will be provided, which will be drawn up in Market Street, opposite the entrance to the Offices.
The remaining Visitors will he convened by train to a temporary platform constructed on the Chester Line, adjoining the Field in which the Inspection of the Volunteers Will take place.
The carriages forming the procession will proceed from Chester Bridge, along Oak Street, Wistaston road, and Victoria Avenue, to the Field opposite the Queen's Park entrance, Where His Royal Highness will inspect the 2ud Cheshire (Railway) Engineer Volunteers*
The Order of Profession will be as follows Mounted Police.
CARRIAGE No. 1.
| councillor adamson. | Allman. " Bebbington. " Broad.
CARRIAGE No. 2
councillor cooper.
cottekill. " Ellis. Winby.
CARRIAGE No 3. Councillor Hodgson. f, Knott.
Lums.
Pedley.
CARRIAGE NO. 4.
Councillor Thomas. " Welch. " Jackson. The borough Treasurer.
CARRIAGE No. 5.
Alderman Macrae. | McNeill. Wilding. The Medical Officer of Health
CARRIAGE- NO. 6. The Town Clerk. The Borough Survey ok. The Sword and Mace Bearers.
CARRIAGE No. 7.
Field Marshal commander in chief
Sir Richam Moon, Bart. The Mayor of Crewe. The High Sheriff
CARRIAGE No. 8.
Field -Marshall Lord NAPIER OF MAGDALA, G.C.K, G
Major General A Lyon Freemantle CB Colonel Lord A. Lennox Cornell . A C. F. FitzGbokge.
CARRIAGE No. 9.
Major -General Dam km,, C.B. Colone Stokley, R.E.
CARRIAGE No. 10.
Baroness SHRODER . Miss Moon.
CARRIAGE No. 11. Mrs. Cotton.
Lord StalbridgeMm. Joseph Verdin. Capt. Kennedy.
CARRIAGE No. 12.
Sir H Fox Bristow & Miss Bristow. Colonel. Hamilton, M.P. Judge Llyod.
-CARRIAGE No. 13. Mr W. H. Verdain. Rev. A. H. Web.
Dk. Atkinson. The Deputy Chief Constable of Cheshire.
Mounted Police.
PROCEEDINGS IN VICTORIA AVENUE AND AT THE PARK.
After the Inspection of the Volunteer Corps (about 3-30), His Royal Highness, accompanied by the Mayor and Corporation, and other Visitors, will cross the Victoria Ave to the Park Entrance Gates.
The Address of the Corporation will be read by the Town clerk, and His Royal Highness will reply
The deed of Conveyance of the, Park from the London and North Western Railway Company to the Crewe Corporation will then be handed over by the- Chairman of the Railway Company (Sir Richard Moon, Bart.,) to the mayor.
The Mayor will receive the Deed and thank the Railway Company on behalf of the inhabitants of the Borough for the Gift of the Park.
A Gold Key will then be presented by the Mayor to His Royal Highness, with which the Park gates will be unlinked, and His Royal Highness Will declare the Park open to the Public for ever.


The Major's Chaplain will offer up a prayer.
The following hymn will then be sung
Oh worship the King all glorious above,
Oh gratefully sing His power and His love, Our shield and defender, the Ancient of days, Pavilioned in splendour, and girded with praise 1
Oh! tell of His might, Oh t sing of His grace. Whose robe is the light, whose canopy space; His chariots of wrath the deep thunder-clouds form, . And dark is His path of the wings of the storm.
3 The earth with its store of wonders untold, Almighty, Thy -power hath founded of old, . Hath stablished it fast by a changeless decree, And round it hath cast, like a mantle, the sea.
4 Thy bountiful care what tongue can recite It breaths in the air and shine in the light; It streams from the hills ; it descends to the mill; And sweetly distills in tin- dew and the rain.
5 Frail children of dust, and feeble as frail, In Thee do we trust, nor find Thee to fail; Thy mercies how tender! how firm to the end!
i Our Maker, Defender, Redeemer, and Friend!
# O measureless Might, Ineffable Love! j While Angels delight to hymn .Thee above*; The humbler creation, though feeble their lays, - With adoration *hall Rap to Thy praise.-Amen.


The Clock Tower and Fountain, which has been erected inside the 'Entrance to the Park, and which has been subscribed for and presented by the employees of the Railway Company, will then he. unveiled by Driver Middleton, of Birmingham, as a Jubilee Memorial.
After the Opening Ceremony, and the Inspection of the Park, By his Royal Highness will be invited to Plant a Tree. He will then visit the Pavilion, where light Refreshments will be provided; and at about'4.30 p.m. will proceed in his carriage (at walking pace) to the west end.of Victoria Avenue, and declare the same a Public Thoroughfare.


The Carriages conveying the Members of the Corporation and Guests will be drawn up in West Street, ready to re-form procession in the same order us before, and drive through the Town to the Railway Station,
The Procession will proceed along West Street, Hightown, Victoria Street, Market Street, High Street, Mill Street, and Nantwich Road to the Station--His Royal Highness leaving by special train for London at & p.m. "B" Company of the 2nd Cheshire (Railway) Engineer Volunteers will furnish a Guard of Honour at the Station.
During the evening the Steam Shed Baud will play Selections of Music on the old Rifle Butts, situate on the south side .of the Lake. The Carriage Works Band will occupy the Baud Stand in the Park.
V. WEBB, Mayor. F. COOKE, Town Crewe.
Posted by Jan Wright at 12:02 AM