Fishing forced through by Council


We would have expected the public to have their say on the matter of fishing as it effects their safety and the lives of the wildlife as swans have been hooked up last year. People I have spoke to and I am in the park every day dont believe it will be safe for people to walk near the lake if fishing is going on. If you fish with a 12 ft rod from the fisherman you need 12 ft clear all around you plus the line in many cases this isnt possible as its to close to paths and therefore people are in danger of being hocked up.
The public have no say one what goes on in the Queens Park, its supposed to be the peoples park but their opinion is not worth anything and no one is listening to public opinion its all done behind their backs
See the statements below the first statement was from Cllr Jones and also printed in the Chronicle the email below proves someone is lying and also that the friends have no effect on the decisions local officers make and as such it’s a waste of everyone’s time if the officers then do what the hell they want without any one from the public getting their opinion considered and the fishing has now been rushed through before anyone can object.

We cant believe Cllr Jones has made the statement knowing it to be false so what going on? Some facts. There has been illegal fishing in the park with kids and other fishing with no licence and no permission they claim they couldn’t stop it.
The wardens are in the office in the park daily and the only time they have walk 3 mins to the lake and stopped fishing is when I have got them out of the office. The Environment Agency will enforce illegal fishing by issuing a £2500 fine get a few people with a fine and word will get around very quick

It clear the Friends Group and ANTS weren’t  consulted as was stated. Its stated the Friends have now power and as such what is there role if no one listens to them or public opinion?
As the Club is run by an individual who is collecting the money and were is it going if it’s the club then it’s a company has the man registered the fact and if he is on any sort of benefits like housing benefit advised them of his income and paying tax? As he has bailiffs acting for him as volunteers that may be working with children have they all been CRB checked?
They say having responsible fishermen will help in the first week they have blocked paths, left rods un attended fished not on pegs so these are no better than the kids were are the bailiffs? 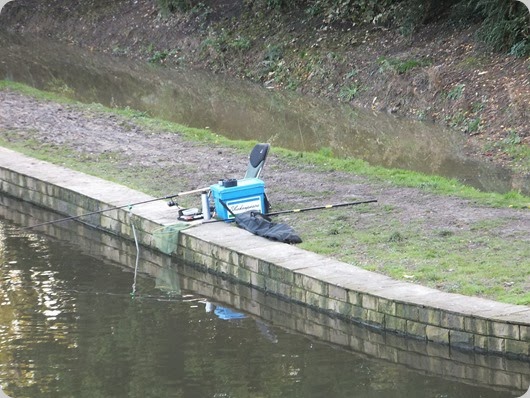 Above every fisherman knows you dont leave your rod in the water unattended as if a fish bites it can drag the rod into the water and be injured note its fishing not on a peg and blocking the narrow path as well its also unlawful to do this, so much for good fishermen setting an example he also didnt use a public toilet but exposed himself in the park 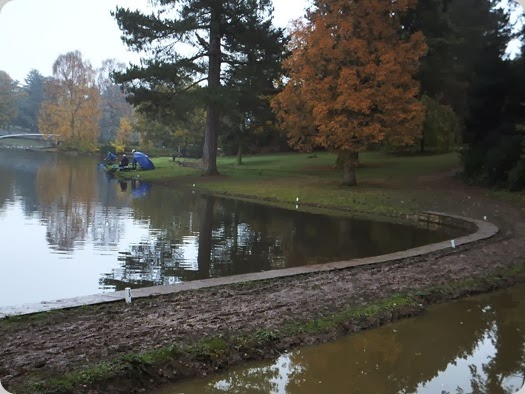 Above can anyone seriously tell me this is safe the path its self is a death trap so lets make more dangerous by letting people fish there and block the path who did the risk assessment on this.

We have requested details of the club, risk assessment, rules details of meetings and despite asking several time they have not been forthcoming what are they hiding? Pictures of the pegs on a two foot wide slippery muddy path show they haven’t done a risk assessment as its very dangerous to walk the path and having someone fishing makes it down right dangerous when pointed out to them they refused to comment.

The Friends mins show the club was to start in January but they have rushed it through and fishing is now taking place why?
Procedure and safe guards are needed if wildlife get hooked up this involves cutting the line and calling the RSPCA none of this is in place.
The fishing club has been made a member of the friends no vote proposed or seconded  the Friends mins state The group will be affiliated into the Friends Constitution – likewise the ANTs. So how can officers FORCE this on friends against the constitution are the  friends group there as a political weapon controlled by officers? So what is the future for the friends if they cant speak for the public and effect decisions then they may as well disband.

There are reports of alleged cyber bullying by a member of ANTS and the friends and this person has three complaints and allegedly forced one person of Facebook  with the bullying, he has also told this person that the ANTs are moving the Burma island and Boar war memorials greatly upsetting this person and causing problems for many people. ANTS have been asked to take some action over this as its Anti Bullying Week and this sort of behaviour isn’t acceptable to anyone. 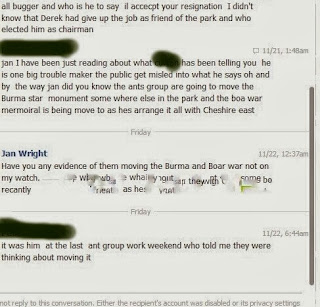 Above the logs of the victim and the statement that the person has told him they are moving the memorials I assume this was done to upset the person which it did and it also brought disrespect for what the ants are trying to do
Email from Cllr Jones
Dear sir
I thank you for your email.
The decision to support fishing in the park has been taken via the two public groups who so brilliantly support the park.
It is the friends of the park and Ants who have recommended this and it is they who believe it is the right thing to do.
I think you should petition these excellent people, who work tirelessly to improve the park and then the council will follow the majority view.
The council is merely following the views of the majority of local people who represent the park.
It is there suggestion not the council and I resent your attacking of your council without full knowledge.
Please contact these groups to discuss and the council will follow the majority view.
Yours
Michael
Councillor Michael Jones
Cllr Silvester

Email from George Broughton
From: BROUGHTON, George
Sent: 20 November 2013 08:53
To: SILVESTER, Brian (Councillor)
Cc: HARTWELL, Peter; EDWARDS, Gareth; MELLING, Kevin
Subject: RE: Fishing in queens park
Fishing has always been a popular activity at Queens Park. It was temporarily stopped whilst the lake was reconstructed and then for a period to allow the fish stocks to recover after relocation back into the water. It was always the clear intention that angling would be restarted and this has been stated to the many people who have enquired over recent years. The intention to reintroduce angling has been raised at the meetings of the Friends Group simply as a means of gauging their opinion and keeping them informed. It is not the Friends Group’s role to formally make decisions on the management of the park but to give the community a voice in this process. We have excellent working relations with the Friends Group who play a large role in guiding our decision making.
Angling does have its critics but it is also one of the most popular recreational activities in Britain today. At its best it is a tremendous way of building inter-generational cooperation as older anglers teach young people to fish. However, when uncontrolled it does lead to the problems as stated below. As managers of the park we have to make judgements about such issues. In this case it is our judgement that fishing will occur whether we sanction it or not as we do not have the resources to enforce a ban. By creating a new Queens Park Angling Club, attached to the Friends Group and run by some enthusiastic volunteers, we are trying to manage the activity and thus minimise any problems. It will bring more responsible adults into the park which will help protect the park in many ways. We have stated that we intend to review the situation again during the close season (Spring 2014).
I hope this is helpful
Regards George
Posted by Jan Wright at 12:02 AM