Another year has gone by and The Queens Park Restoration that was conceived in 2005 is far from completed. For years we have had lies from the council about the project, last years friends mins said in December the path would be done in March now they are saying its next spring. The council stated that Burma Island would be done by last xmas but nothing has been done. Promises were made to control dogs in the park by enforcing owners to keep them on a lead this hasn’t happened.

The park is a public danger with all the paths apart from the main ones in a dangerous state and not accusable to disabled and mothers with prams. When it freezes at week ends there are no wardens to grit paths and they become skating rinks. The main lighting was removed from the main drive so any event after dark are dangerous, The gardeners workshops are full of asbestos but they still have to work in there against all H&S rules.

Of all the money spent so far the Bowling hut , Café, Clock, lodges have all had to be re done due to problems with the first restoration and this is the only work been done in the park in the last years. There should be an enquiry why the restoration has to be redone why was it passed in the first place if it wasn’t done right. The once pride of Crewe has become a disgrace if you leave the main paths you are in constant danger from broken paths and other dangers.

There is no real leadership in the park and very few staff to even keep the place going there was always a experienced head gardener who had vision and knowledge to keep the park maintained but this is sadly lacking. If the park was at Macclesfield I am sure it would have all been done by now Crewe has become the poor relation.

When will it be finished is a major question Coronation walk once one of the main attraction of the park with its roses, stream, water fall and pets is now just a tip and no even on the radar to be restored. The sad bit is its not big money to restore it. If only volunteers would see sense and concentrate on it a lot could be done they mess about with it then don’t touch it for another few months by which time it’s a jungle again. If they worked on it all the time then it could be made presentable. All the beds are full of weeds and self seeded trees growing and the once lawns are now a meadow. It a very important corridor in the park as it’s the only place birds can get a drink as they cant drink from the lake as its to deep. If it was restored it would increase the wildlife in the park but the wildlife group leader has stated shes not interested in birds only her swans.

Why the people of Crewe are not up in arms over this one cant understand I started the website in 2009 and it was supposed to be a 1 year job to restore it 7 years later we are still no further forward in fact its getting worse as the gardens are now down to a few men before there lots of them. They are just fighting fires and unable to do any improvements to the park. Walk round the outside of the park and you can count the number of self seeded sycamores and it runs into hundreds something volunteers could do but there is no direction from anyone and they all do their own thing often destroying things through ignorance.

I have in the past had experts down and they have studied what wants doing and given detail right down to the plants needed but the council have ignored this, the lake were there are post should have plants in for wildlife and to oxygenate the lake but this has never been done even though it was in the plans.

The park has become a private members club and one of the most complained out thing at one time you could hire bowls and have a game now its just for the select few members. The fishing is used only by a handful of people on a regular basis. Often you cant go to the toilet in the park as the café is closed, you then have to put up with dogs running about free as no one stops them.

I shall continue to record events in the park as a historical record of the restoration I started out with hope of a quick restoration and it never turned out that way it was once a Jewell in the Crown with well kept lawns and lots of flower now its like a deserted bomb site, if you only use the main paths it looks ok but venture off the main paths into the mud and you can see but if your disabled or have a pram you cant get there. 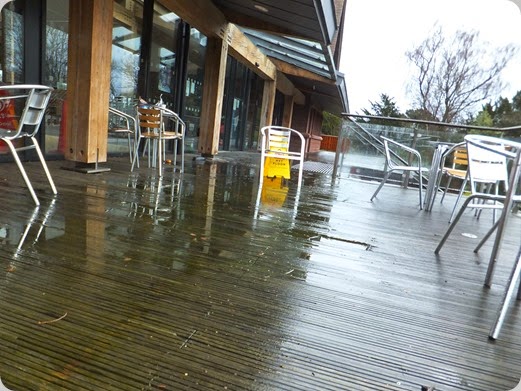 Above the cafe on a wet day the  wood is soaked and covered with green slime and like a skating rink. Why because there are no gutters and all the water runs onto the wood and it has all got to be replaced 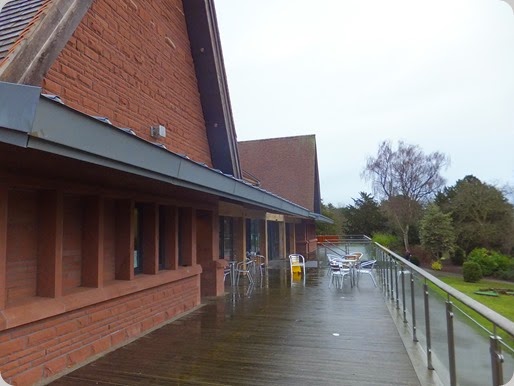 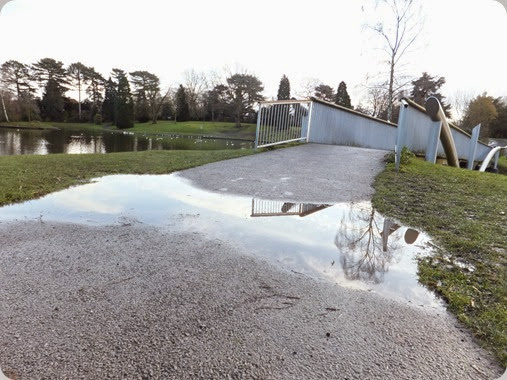 Above the new path up to the bridge they cant even get that right as you can see it floods and when it freezes it dangerous how hard is it the get the levels right? 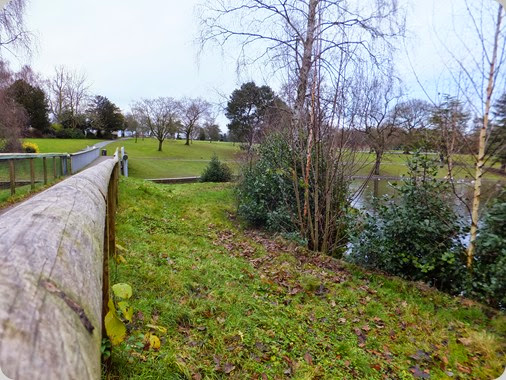 Burma island no work has been done on this island 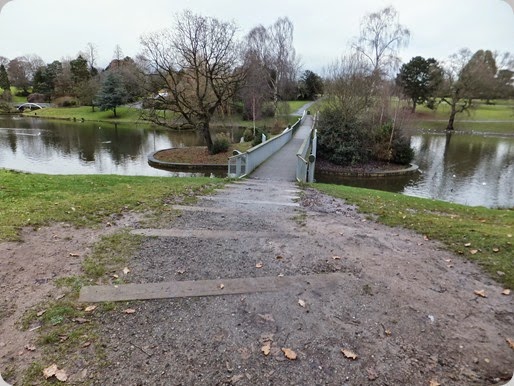 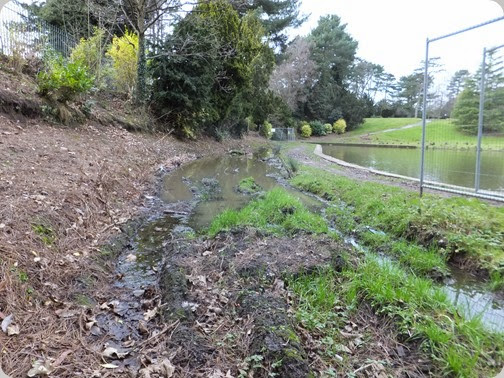 Goosanders in the Queens Park 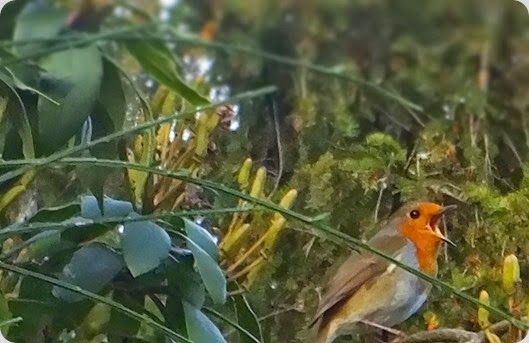 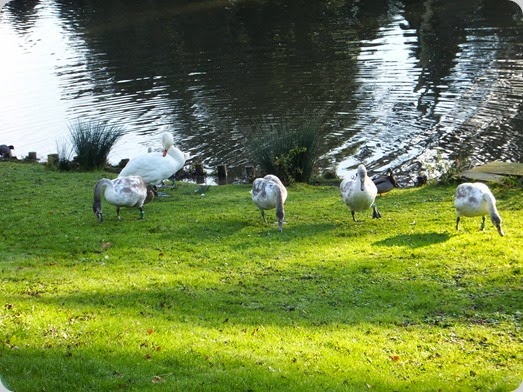 The swans are getting white now the females more so than the males. Concerns this week as to how they have been tamed and if you dont know and feed them they eat out of your hand problem was one women had a baby with her and they frightened the mother as she thought they were attacking the baby. If they one do it for food if you have a baby it can happen they attack by accident 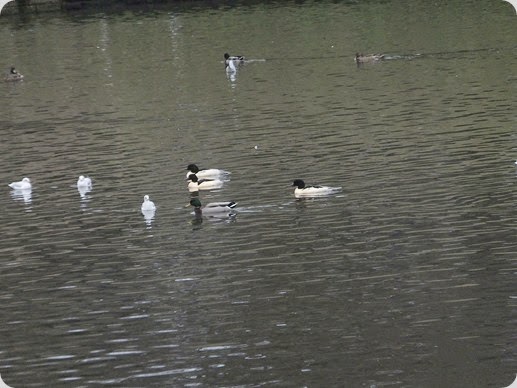 Goosanders in the park starting with one then today Mondays we had four of them. These handsome diving ducks are a member of the sawbill family, so called because of their long, serrated bills, used for catching fish. A largely freshwater bird, the goosander first bred in the UK in 1871. It built up numbers in Scotland and then since 1970 it has spread across northern England into Wales, reaching south-west England. Its love of salmon and trout has brought it into conflict with fishermen. It is gregarious, forming into flocks of several thousand in some parts of Europe 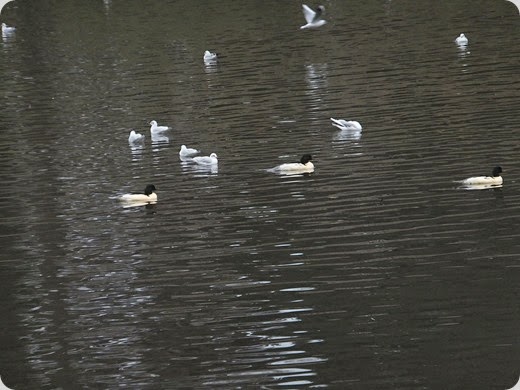