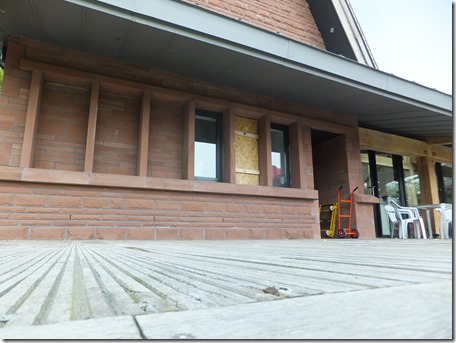 Above the Cafe window smashed again this week. The grebes nest and eggs have gone we cant say its kids but its sad anyway. Man hole covers have been removed and its believed one was used to smash the cafe.

Willaston and Rope Ward UKIP Councillor Brian Silvester is calling for more warden patrols at Queens Park, Crewe to curtail the surge in mindless vandalism. He said," I understand that since the park wardens were removed by the Council that  vandalism in the park has escalated. The cost of vandalism in the last few weeks has averaged a £1000 per week. I am calling on the Council to take action to stop this gross and unnecessary loss of public money. Millions have been invested in the park to return it to its former Victorian glory. It is a great shame that the Council short-sightedly withdrew the wardens and left the park to the mercy of mindless yobs."

Dear Brian
There have been a number of incidents of vandalism and theft from QP recently and we have held a coordination meeting with local police. The incidents tend to happen in the late evenings when the park is empty.
We based the community wardens here some months ago to provide a uniformed presence as they come and go and police have increased their presence through pcso's.
However, the behaviour continues, so I have recently tasked our cctv engineers to put together a scheme for the park, particularly in those areas which seem to be the targets around the pavilion.
They are developing this scheme now, including looking at lighting, to see what can be done to deter this behaviour or gather evidence. We do not have a specific capital fund for this and we will need to look at virement options when we have the estimated costs available.
Hopefully we can make the case for invest to save on this given the costs of damage so far. It is unfortunate that additional security measures were not introduced as part of the major project works inherited from C&NBC in order to protect the investment into the park. We will seek to get new funding once we have designed an effective scheme based on recent incidents.
Kind regards
Peter