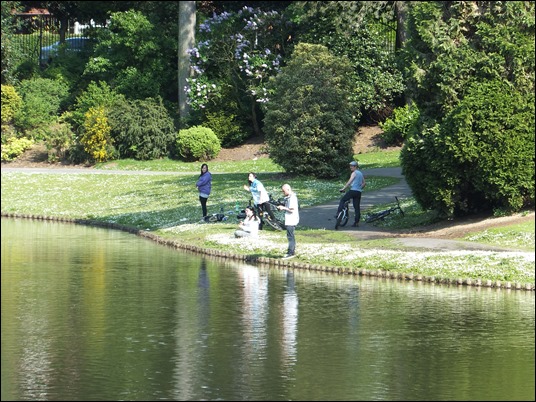 Lots of complaints this week and people are saying the park is now like the Wild West as things get out of control and the council do nothing about it. Its illegal to fish in the lake and there are signs everywhere but people sit under the signs and fish. Some describe it as being like a fishing match as you can see above its not just the fact they are fishing but they block the path so people cant walk around and more importantly they cast the line with out a thought for anyone walking by.We have had people nearly hooked up by people casting the line as they walk past. Fishing near Tipkinder is the area were all the wildlife swim and they are in danger from fishing lines as well.

Dogs have been high on the agenda as complaints pour in ne man counted 15 off the lead in one short afternoon with one chasing all the wildlife and when the  owner was approached he only responded with verbal abuse. Under new laws the chasing of wildlife makes it a dangerous dog and it can be shot. Even old people come with dogs off the lead and they get as abusive as others often when the park is packed with young children. Loose dogs and children dont mix they may be friendly but they  can chase in fun of knock children over. Nothing will be done until a child is hurt then we will see some action. We often have school children come to use the park as young as 7 and now they have insisted that wardens patrol as loose dogs were around last time they visited and they cant take the chance of a child being hurt.

It was discussed at the friends meeting about obtaining a dog control order the suggestion being that no dogs would be allowed around the childs play area as you often see loose German Shepherds in that area and this is clearly unsafe. other suggestion are for zoning dogs  were they must be on leads etc and a fine would be introduced for those failing to comply.

Vandalism in the park has now cost more than £25,000 a lot of which could be saved if we had wardens the council are failing in their duty of care and not compiling with Health and Safety to make the are safe.s that parks in other Cheshire  towns  are looked after a lot better than our park and all the money seems to be going to there.