THE EARTH MOVES AT QUEENS PARK 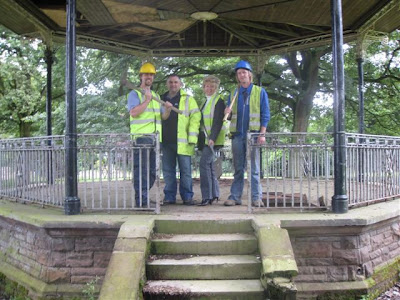 The Queens Park project has been surrounded by speculation and delays. Almost every aspect of the work has had its complications; however as Cheshire East Council strives forward it has put measures in place to literally get the earthmoving.

Cheshire East Council is committed to supporting and utilising local businesses and the economy, the project team of Consultants and Contractors appointed to date are all North West based.

This week has seen another local contractor earth moving, utilising the clay-soil deposits from the debris of the lake, to form the basis for new raised footpath improving access and supporting the original failing retention wall, all on the North West side of the Park.

Even more exciting is that the Cheshire East specialist restorers ‘Lost Art’ has been appointed to complete the Bandstand refurbishment and works commenced this Monday (20th).

At a recent meeting with the Heritage Lottery and Cheshire East Council all parts demonstrated their commitment seeing the works progresses and finalised.
As the original contractor went into administration, the project legalities and the stoppage of works caused frustration, both within the Authority and to members of the public.

On yet another positive note tenders for completion of the lake and bridge works have now been returned and are being reviewed by the Consultants, including the proposed building works required. It is anticipated that an announcement of the new Contractor will be made within weeks.

Councillor Andrew Knowles, Health and Wellbeing Portfolio Holder for Cheshire East Council, said: “I am delighted to see workman now on site at Queens Park and even more so that local Contractors and Experts are part of this process. It is a very exciting time for the Park, the current Bandstand works, which will be undertaken during the next 20 weeks, utilises the very best of our North West Craftsmen with their skills and high quality historically authentic works.”
Posted by Jan Wright at 12:52 AM