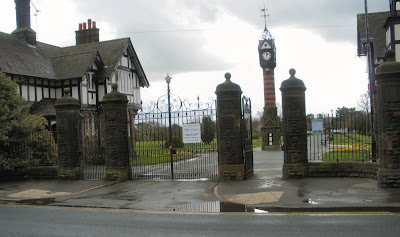 This site was setup to record the restoration of Crewe Jewel in the Crown Queens Park It should have taken a short time but has been hit by disasters of one sort or another so people are asking will it ever be finished? Originally set to be £3.7 million pounds funded mostley by the lottery now its closer to £6.5 million The dredging of the Lake by WM PLant Hire was carried out during August and September 2007 and is now finished. The bridge to Burma island has been knocked down and a new one is to go in. Many trees and bushes have been removed especially on the islands in the lake and this will take years to get back to its former glory. April 2009 and the project came to a grinding halt as the main contractor went into liquidation. There seems little doubt a new contractor will be found but it will delay the project. We will keep you up to date with whats happening with pictures of progress made so you can see whats happening.
Posted by Jan Wright at 11:55 PM