About the Queens Park 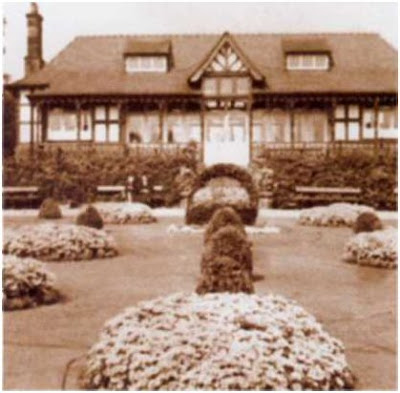 Welcome to the "Jewel in the Crown", the lovely Queens Park, with walkways, trees and shrubberies, boating lake, activities and interesting history...

THE DEDICATING OF QUEENS PARK
There was much excitement on the afternoon of the 4th July 1887 as the people of the town celebrated the Dedication of Queens Park, in conjunction with Queen Victoria's Jubilee and the local Jubilee of the opening of the Grand Junction Railway 50 years ago.
Visualise and imagine the atmosphere created that day. A large number of Venetian masts, streamers and flags were placed along Victoria Avenue and all around the park and town. Banners with "Best Wishes"messages were hung from buildings and an array of other carefully constructed decorations could be seen.
At 2.30pm the streets were lined with spectators expectantly awaiting the arrival of the Grand Procession, the highlight of which was the
"Fireman's Arch". This was formed, by the Crewe Volunteer Fire Brigade, at the entrance to Victoria Avenue The arch was constructed from fire escape ladders, decorated with bunting, shields, mottos and the Town Council's Coat of Arms. Six men manned each fire escape under which the procession passed, on its way to the park.
Sir Richard Moon, Bart., the Chairman of the Railway Company, conducted the proceedings of the Dedication on behalf of the London North Western Railway Co. To mark the occasion, he was presented with a scroll of parchment, enclosed in a beautiful silver casket, enrolling him as the First Honorary Freeman of the Borough. A cascade of balloons and a firework display concluded the day's celebrations
A year later, on Saturday 9th June 1888, the Park was officially opened to the public by HRH The Duke of Cambridge KG who, at the time, was the Field Marshal Commander-in-Chief for the Cheshire Volunteers and was presented with a suitable gold key.
Today, the Park retains the original Victorian layout as designed by
F W Webb and Edward Kemp, at a cost of £10,000 on behalf of the
LNWR Its total 45 acres is oval in shape, with a principal axis.
subsidiary cross axis and a man-made lake. Cast Lodge
An 1882 map shows the site of the park lo be spread over 11 fields and part of the sewerage works, which were closed in 1874. The straggling Valley Brook passes through the park and leaves the site on the south west corner A straight footpath crossed the site and connected West Street, with the park, via Coppenhall Hayes, as Victoria Avenue had not yet been constructed.
George Latimer, the first Custodian of the Park from 1888 to 1906. who was succeeded by Lawrence Morgan from 1906 to 1935, contributed greatly with his forestry expertise, leading to the acknowledgment that today Queens Park is one of the finest Parks in England. Another notable contributor was Herbert W Probert whose

duties commenced from 1935 to 1960. He was responsible for the laying out of the neighboring King George V Playing fields and the Coronation Walk, to commemorate the Coronation of George VI and Queen Elizabeth in 1937. This is a landscaped walkway, through rock gardens beside a small stream, which leads from the lake and winds up to the aviary.
From 1960 to 1984 the park's Superintendent was Colin Farmer, who re-located the greenhouse and designed such additions as the Burma Star Island Memorial, the Scented Garden and the Jubilee Cafeteria Terrace. It has been rumoured over the years that the LNWR gave the land to prevent the Great Western Railway from building a station in the area. However, this is thought to be local rumour only as we know that the LNWR were originally seeking to construct the line from Crewe to Chester, which would run alongside the Valley Brook. However, the ground was not firm enough and a more Northerly route was chosen. Had this gone ahead it would have taken the land used for Queens Park. An entry, in the Minute Book of the Board of Directors of the LNWR. on the 18th December 1886, refers to the area being given for
a public park. Politics or not. we may never know. It is only certain that Sir Richard Moon's wishes, in his Dedication speech, for the park to provide pleasure and happiness to the community for generations to come, has to date been fulfilled. 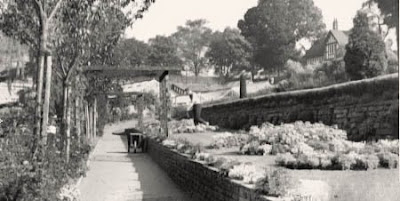 A notable feature is the four and a half acre. man-made lake, which has been beautifully landscaped into the park. Its source is the Valley Brook, which runs out of view under the lake, until it reappears on the adjacent golf course.
It was originally formed by "grading in" from existing banks and leveling off to a depth of five feet. By "puddling" the clay bottom it was made watertight and a dam at the west side was erected. Four bridges, originally wooden, and surrounding paths make a popular walking circuit around the lake. After the cultivating of Valley Brook, which improved the quality of the water, swimming was permitted. By the west island the water area was deepened to ten feet and a diving board and changing huts were provided but eventually removed in 1936.


In 1913 a wormscrew was made in Crewe Works to aid the filling of the lake and this is still very much in use today and relied upon.

On the south side of the park was the Volunteer Rifle Range with the 800 yard firing point situated near to the Gas Works entrance of the adjacent Railway Works. The range crossed the future site of the blast


furnace tip, which is now the Tipkinder Park. The target butts were on the Valley Brook bank, to the south of Burma Star Island.
During the last war the lake was considered a possible location aid for German aircraft bombing the factories, so in October 1940 the water was drained out and the bottom camouflaged with evergreen branches Other branches were placed over the greenhouse, however, by April the evergreens were removed and the water replaced. It now transpires that such action was taken too late, for at the end of September 1940 the Germans had taken an aerial photograph of Crewe, showing '10K0M0TIV/FABRIK" L.M.S.R" and "FLUG-MOTOIEWWERKE, ROLLS ROYCE LTD". This also shows anti-aircraft barrage balloon sites at the Old Bandstand, Queens Park Petrol Station, opposite to St Mary's Catholic Church. Leighton Park and Badger Avenue close to Ford Lane. The Ring Road around Queens Park and the band of trees inside are in addition to the lake, all very distinctive from the air.


During the renowned Winter of 1963. the ice was so thick that skaters took to the lake. In the evening the area was floodlit and hot food vans were well patronised.


BURMA STAR ISLAND
In 1968 the island in the middle of the lake was re-levelled and landscaped with new paths and seats, and dedicated as a permanent Memorial to the Allied Forces who fought in the Burma Campaign during World War II.
The Memorial Stone, which was transported from the excavations of the ICI Works at Runcorn, has the famous Kohima epitaph;-
"When you go home tell them of in and jay for their tomorrow we gave our today"
OTHER INTERESTING FACTS

It is interesting to note that it is said that the fossilised remains of a Tulip Tree, a Lepidodendron. dated back to the Ice Age - of the Devonian period, some 320 million years ago. is located in the path which leads from the Cafetena down to the lake. The fossilised tree was given to the Park by John Knott when he was Mayor of Crewe in 1888/9.
As a contrast just along the path, beside the Coronation Walk bridge, is a twisted Willow, now at least 30 years old with its fascinating, contorted shape.
Additionally, one of the oldest pieces of local history is sited along the Coronation Walk path, it is a piece of Aberdeen
Peaceful walkways granite, a very
special remnant from the glacier age some 500 million years ago. It was discovered when the foundations for the original Company works were being excavated
During the last war. both the flowerbeds and greenhouses contributed towards community welfare, producing seedlings of various vegetables. In 1941, approximately 35,000 onions and crops consisting of l,049lbs of tomatoes and 512 cucumbers were grown, all of which were sold to 3,470 local people.

Memorial plaques are on the four faces of the monument, containing lists of those who left the town of Crewe to undertake militiary duty in South Africa. The north facing pediment has the former Arms of the Borough with the motto "Never Behind" inscribed below the dates
1899-1902. The bronze figure of Tommy Atkins, with rifle, bandoleer belt, pouch and water bottle, stands to attention at the top of the monument. On either side of the base, lying down, are two full-size stone lions. At the front of the monument, the magnificent bronze engine model designed by F W Webb, once stood. This is now now proudly displayed in the foyer of the Municipal Buildings.


VICTORIAN HERITAGE
Behind the monument is the Jubilee Cafeteria, which opened on 12th June 1977, together with the new Bandstand This more modem structure replaced the original Victorian Pavilion which was burnt to the ground on the night of the 29th December, 1972. The Senior Fire Officer reported there had been a possible electricity fault. Because the water mains had been fractured by frost, firemen pumped water up from the lake and although they worked throughout the night, it was to no avail.
On Sunday afternoons throughout the summer, there is a long tradition of brass bands performing in the park, this has continued to this day providing music to suit all tastes and ages.
At the other end of the main drive, at the Park's entrance, stands the prominent Clock Tower 1888 which was donated by employees of the Railway company. Unveiled by James Middleton, who had the distinction of driving the first train into Crewe fifty years prior to the clock donation. The tower is topped by an elaborate support to a weather vane. At the base of the tower, on either side, there used to be two drinking fountains with brass cups on chains.
Adjacent to the Clock Tower are two stone and timber lodges, built between 1887 - 1888 by John Brooke; not quite a pair, as the design of the West Lodge incorporates a Bell Tower. An inscription at the first floor level of the West Lodge commemorates the opening of Victoria Avenue by the Commander-in-Chief H.R.H. The Duke of Cambridge. Look on the lodge for the spider, its web and a tree, a design pun on Francis William Webb. The inscription at first floor level of the East

Lodge commemorates the Jubilee of Queen Victoria and the 50th Anniversary of the opening of the Grand Railway Junction. You will notice a painting of a bat, moon and tree, in yellow and green -another punT this time on Sir Richard Moon Bart, Chairman of the LNWR Company. The red sandstone used for both lodges came from the railway cuttings that go down to Lime Street Station, Liverpool. These buildings are contained on the Department of the Environment's list of buildings of special architectural and historical interest Grade II.
An impressive ornamental iron gateway stands at the entrance where the Lodges are located. The side gates contain the date of the Parks dedication 1887 and the main gates have a royal crown in their design supported by four red stone gateposts.
Posted by Jan Wright at 12:00 AM