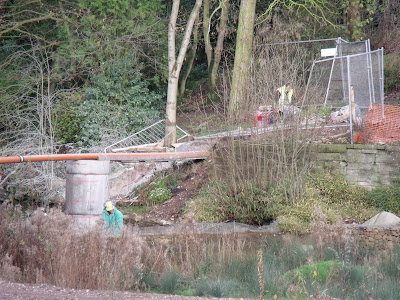 Arrival of First Bridge into Queens Park
Media Invite - Wednesday, January 27, 2010 at 10am
The first in a series of landmark bridges will be installed at Crewe’s Queens Park next week, when the region’s press is invited to record this historic moment.
Queens Park, the only formal park in Crewe, is more than 130 years old and is currently undergoing a £6.5 million pound restoration, thanks to the Heritage Lottery Fund.
Altogether the 45-acre park will eventually house five bridges, the first of which is Tipkinder Bridge over the inlet at the entrance to the park.
It’s the smallest of the five bridges at 7.3 metres in length and is made from timber and steel.
The most impressive structure will be Broadwalk Bridge, which will be 40 metres in length and will be unveiled later on this year.
Councillor Andrew Knowles, Cabinet Member with Responsibility for Parks, said: “The installation of Tipkinder Bridge marks the beginnings of a new chapter in the history of Queens Park.
“Since the 1870s, this wonderful public amenity – handed to the people of Crewe by the London and North Western Railway Company - has brought enjoyment to generations of Crewe families, and will continue to do so with a modern twist on the traditional Victorian park.”
Works:
To allow these extensive works to be carried out, around two thirds of the park have been closed off to the public, but it’s hoped that three quarters of the park will have been re-opened by the end of the year.
Other works in the pipeline include a planning application for replacement buildings, the largest of which is the new pavilion to replace the Jubilee Cafeteria built in the 1970s.

Councillor Roy Cartlidge, of the Crewe West Ward, who has supported the project throughout, added: “The installation of the main bridges will be a significant part of the Park’s history and are intended to last the next hundred years and beyond. “