£7m spent but, years after, Queens Park still not finished

Willaston and Rope Ward UKIP Councillor Brian Silvester is calling on the Cheshire East Council to get their act together over Queens Park Crewe.

He said," It is beyond belief that over £7m has been spent but, several years after, Queens Park is still not finished.(See below and attached) Basic requirements, like accessible footpaths to allow people to walk around the park, have not been provided. Many of the footpaths have not been finished off and the west end of the lake has had no footpaths for over two years. It is incredible that almost four times as much has been spent on consultants compared to the amount spent on footpaths.(See below)On one of the pavilions (which cost a total of £1.6m) there still isn't any downspout so the water wets you as you walk under the veranda.(See attached photo)

Since the ill conceived redundancy of the Park Wardens, there has been an increased level of lawlessness in the park. Kids on bikes, copious levels of litter, repeated criminal damage, motorbikes being ridden across the lake bridge and dog owners encouraging their dogs to attack waterfowl.

The park needs to be finished off properly and it needs to be policed efficiently. The original intention was to return the park to its former glory but urgent action is now needed if that is to be achieved."

From the Friends of QP mins Chris Lawton has re-measured the pathways and received some budget costing's – the value to complete works is around £500K, which is a big improvement on the £2mill figure quoted elsewhere. The cost via FOI is now £382,000.00 that's a few weeks later. So one may well ask why the discrepancy in these figures so the latest is £7.5 million with other things still want doing like coronation walk Burma Island 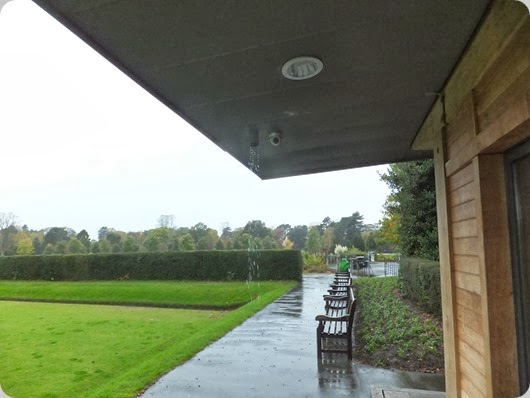 Above the bowls hut now has CCTV but if you look at the photo you can see that the water still falls on your head as there are no down spots. It was supposed to be a posh chain but years later its still not finished. 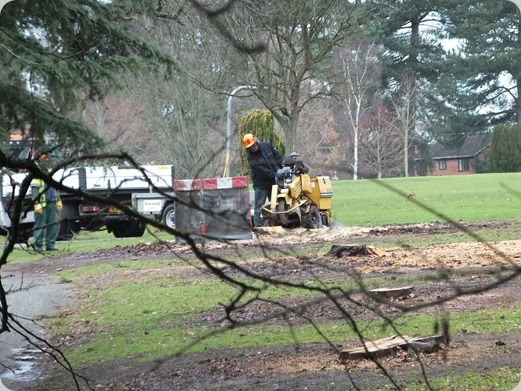 The tree cut down from startling damage are having there stumps removed but they seem to be struggling with it as they have tried for a couple of days without much progress. 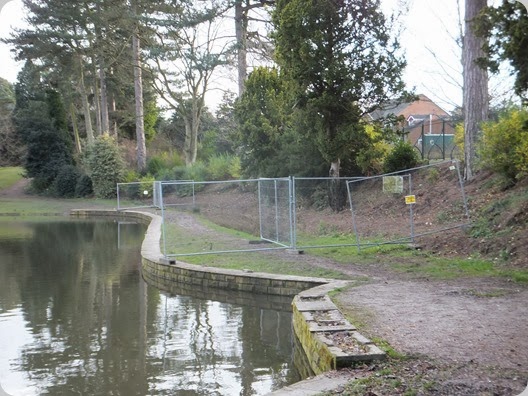 The dangerous path at the bottom of the lake has been closed. It is deadly to walk on as there is water either side and its just a mud bath and this weather if it freezes your going in the lake and there is no life belts any more as they were removed not a good idea given they have allowed fishing should have been risk assessed.