Today 4 witnesses watched as a father and two sons were fishing near Tipkinder. They were not taking any care were they cast and the swans and their babies swam close to them. They then started throwing at the swans at which point we called the Police.

The RSPCA were called as by then they had hooked a baby swan and wrapped line and float all around its neck. The RSPCA arrived and did a good job of catching the baby and fighting off the father swan as he kept attacking. The hook was removed from the swans neck safely.
The RSPCA advised the fisher men of what they had done. The Police PCSO arrived and walked around seeing 10 other fishing under No Fishing signs and took no action. They spoke to the ones who had hooked the swan and took no action and left them fishing to do it again.

The PCSO said they don’t have the powers to shift anyone illegal fishing or take any action for dogs off the lead. Even when they break into fenced off areas to fish causing criminal damage they wont take any action. They will only take action if fish are removed from the park as then they will charge them with theft. In the past other PSCO have attended and taken action on the fishing. 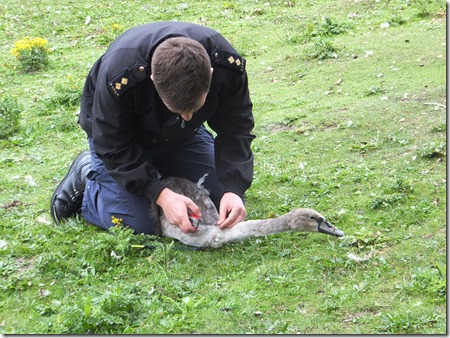 They claim that any volunteer wardens can not stop anyone fishing or do anything about dogs off the lead. They say its down to the council or environment agency this puts the ball directly back in Cllr Jones court as people are volunteering but they are wasting their time as the council refuse to back the project. People volunteer and act as wardens to keep the park safe for families  risking abuse and the council wont help in anyway. Cllr Jones spoke on tv of a partnership but it’s a one sided one if the council wont do their bit

This is the second time in a couple of months a swan has been hooked up and one women has been hooked as well. A risk assessment would say the odds are that a person be it a baby an OAP or other is going to suffer horrendous injure   while the council refuse to take action on this fishing which is conducted next to busy public pathways by people who don’t care were they cast the line. The council have a duty of care to keep the park safe for people to enjoy by failing on Health and Safety grounds they leave themselves open to being sued if any one is injured given the fact they have been told the risk and taken no action on dogs or fishing. Evidence on Facebook and the website could be used by anyone suing the council if they get injured. 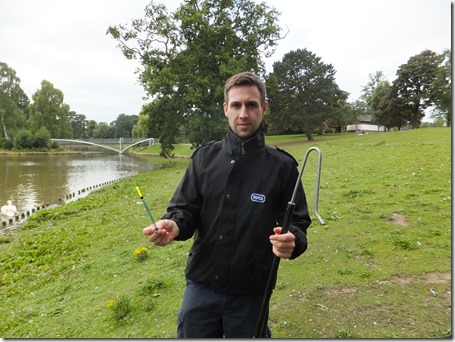 Most people who visit the park do so to feed the ducks or show them to the children and they are horrified that they can be killed by people illegally fishing. One of the baby swans is missing and its possible its died a horrible death by fishing line, by a dog off the lead  or by a fox.