Friends of Queens Park Meeting No 23


No    Item
2.0    Previous Minutes
The minutes of the last meeting were agreed as correct
3.0    Matters Arising from the Minutes
None
4.0


Friends Chairperson’s Update and works in progress
Derek Morgan presented his report.
( Comments and questions arising are itemised below )

i. Pavilions – Contractor ‘Tolent’
Completion expected early May. Weather much better and some construction time has been caught up, but some time has been lost due to recent theft of recently installed electricity cables (copper value). The roof structure and walls are approaching completion and the internal works are in progress.

ii. Lodges- Contractor ‘ISG’
A 16 week programme commencing 31st January and completion date is 20th May.  A good start has been made with the site compound fenced off, cabins installed, scaffolding erected, demolition of non-original extensions completed and some stone cleaning underway.  A temporary access has been created 50 yds from the Lodge to assist users of the Park - it has been signed accordingly at both entrances. 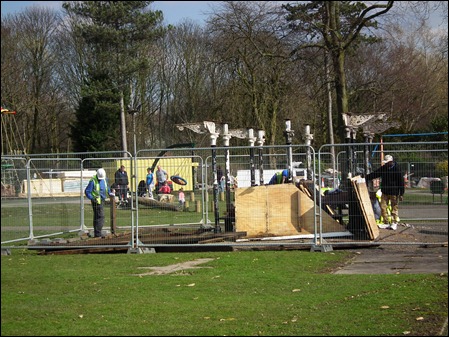 The scope of works, for this contractor, includes the restoration of the Clock Tower, Boer War memorial, the monkey shelter (Southern Timber Shelter) and Play Area Shelter.  Works commence on the 14th March; completion date and programme are not known yet but probably about 12 weeks.

iv. Play Area- Contractor: County Landscapes
There are some defects still to be made good and a new path linking gym equipment is proposed,  plus removal of old play area agreed. Timescale is likely to be approximately four to six weeks and should commence on 14th March.

v. Footpaths
Costs for footpath works are due within the next two weeks, following which we will be able to agree the scope of works, programme, finalise costs and decide which contractors will be involved. 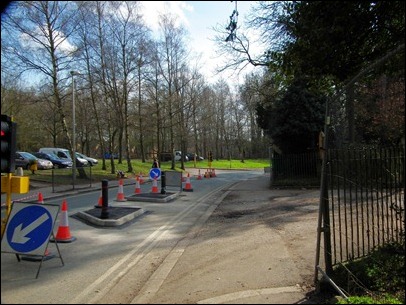 The traffic calming works and Tipkinder crossing is underway this week with a new cycleway across Tipkinder. Access for disabled drivers is possible but a bit restricted until the new access road through the depot is formed as part of the footpath works later in the summer. 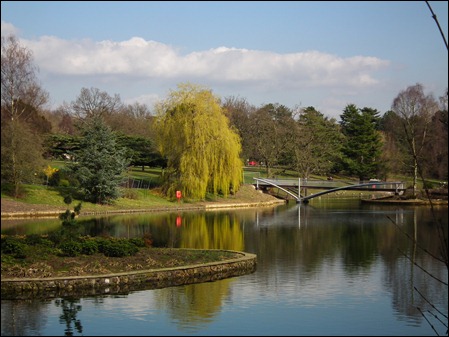 
Fish are to be returned this month. Following checks it appears that there has been a lot of poaching of the large carp. When the holding pool is partially drained it will be possible to determine how many large carp are left. A health check requires ten fish, so assuming there are only fifteen it would be better to give them away to our partner angling clubs and purchase a new healthy stock.  This will be investigated. 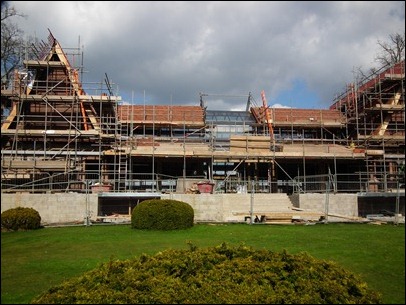 The Queens Park Cafeteria Services was recently advertised via the Councils procurement process, however, the contact was linked to three park sites of which CEC has received an objection.  We await legal advice on how this will be resolved and will let the group know in due course.
The Parks Manager has applied for a Cafeteria Licence for the sale of alcohol and to utilise the venue for entertainment to increase opportunities to maximise footfall through events, functions and refreshment sales.  Maximum opening hours the cafeteria could potentially operate is between 8am – 2am with alcohol and hot food sales up to 1am -- again to facilitate the venue fully for functions and events. We will invite the successful contractor  to introduce themselves to a future Friends meeting once the contract details are confirmed.

POTENTIAL RE-OPENING EVENT
No Palace confirmation has been received.  Therefore, it is proposed to plan for the
re-opening possibly on the second Saturday of September.  This will allow sufficient time to make the event arrangements and engage with the community.  Also, the Park will be much closer to completion.  Should the Palace confirm, separate arrangements for an appropriate event/display will need to be arranged.

The heritage lottery visited the site to discuss the Managers initial pre grant application.  Whilst that went well, they require longevity of activities to be confirmed.  Given the restricted resources available in terms of administration we are not sure how practical this is.   The grant application was £15k; however, some limited monies have been identified within the project which would ease the event arrangements considerably.
Key events would include a re-creation of the original procession which entered the Park.  Already discussions are underway with local art workers to produce costumes with school children to recreate this, a marching band and fireman’s arch echoing the event of some 120+ years ago.  The later date makes school involvement possible.  Plus, Victorian themed side shows.... budget permitting.  And, concluding with a pyro-show, the like of which most local residents would not have seen.  This would be an interpretation of Crewe evolving from an industrial engineering town into today’s more modern economy.  We await to confirm availability of this performance.


9.0    AOB
Q: Is the Tipkinder Car park to be resurfaced?
A: (A. Leah) no money is available for resurfacing or bay marking etc – to undertake this project would take monies from the paths in the park. The problems with the TipKinder car park are problems with holes, rather than a need to resurface – finding filler for these can probably be arranged.
Park access for events and disabled drivers will change as the paths are completed – there will be no vehicle access via the east gate when the project is finished.
To the west, the new Cycleway needs soil and reseeding from the Golf Club area.

Opening of south and west gates: The gates are being fabricated. The final costing for refurbishment of paths is greater than foreseen. This is partly because some of the paths were not  originally well-constructed. It is envisaged that the paths project will enable a link norh –south and east –west through the park and across the bridges. Other paths might have to be given a temporary surface until further funding is available.

Q: When will the Games Pavilion be completed? The season begins on April 1st.
A: It is scheduled for completion by 1st May and won’t be far off completion when the season starts. Temporary facilities will be confirmed in the interim – Elaine to arrange.

Q: When will there be access to Burma Star Island and use of that bridge? Could the barriers be removed so that the bridge can be used as a viewing platform?
A: It will be linked to the forthcoming footpath project and  take into account changing levels and gradients, plus some changes to footpath layout.  The viewing platform suggestion will be considered.

Q: Will the large roof space area of the new pavilion be utilised?
A: No. As in the original plans, the beams will remain exposed and the open-plan design will allow a clear vista.

Q: Is the double swing in the new playground dangerous?
A: It is in accordance with required health and safety standards – some signs about suitable age group of users and usage will be considered.

Q: The gym equipment area gets very muddy – what can be done about this?
A: A path link is to be added and drainage improved.

Q: What are the two Lodge houses to be used for?
A:  They will be used for offices, staff facilities and as a community facility with approved and signed disabled access and toilets.

Q: What sort of re-opening event will there be? Will it be in place of the Carnival?
A: The event is no longer contingent on a royal visit (see Chair’s notes above) but requires an amount of funding that is not currently available. Nigel Irlam suggested approaching the townspeople for support by staging publicity events in the town centres.
It was pointed out that the Friends Group, as organisers, is not a registered Charity.

It was also suggested that a plan of action for the publicity be put to the Town Centre Manager by Nigel.
There was a further suggestion that the opening event should involve local community groups and reflect the multi-cultural society we live in.
With regards to Carnival, CEC has not approved any event budget.  The re-opening event is a separate issue and has only £10k allocated at this time with a further £5k contributed form Crewe Trustees.


Q: How will children and young people be involved?
A: Elaine referred to the success of the Christmas Lantern Procession. If the opening goes ahead in September (?) there will be a Victorian Parade with multi-generational involvement. School-based workshops could begin in June. If there is to be a parade, a route will have to be agreed – all ideas are welcome!
AOB    Derek Morgan : presented the Friends Group with a cheque for £85, this being half the proceeds of Santa’s Grotto in the Park, as agreed. He was thanked for all his work on this project.
He also advised the group of a September event for Scouts: The Monopoly Live Run with groups camping overnight in the Park, entertainment, a Jamboree and sponsored prizes.
Donations will be made to the Friends Group.
AOB    Elaine informed the group that there is to be a competition to name the new Pavilion and details will be in the Chronicle.
A time capsule will also be buried this year and suggestions for its contents are invited.
DONM:
Wednesday 20th April at 5.30pm
Venue to be confirmed