Is CEC guilty of Criminal offences against badgers?

The badgers safety has become a criminal issue as CEC and employees fail to take action and the Police investigate a wildlife crime? Below is details of the complaint to the council and there response the writing in red is my response to CEC s response. Several Badger groups have provided advice and shared there knowledge on the matter

I wish to take this to the next level before referring it to the Ombudsman. The case is a very serious one as I believe its a criminal offence that has been committed and may be committed again if actions isnt taken. The Police have taken statement and evidence and a criminal prosecution may follow if work continues without a survey and any required licences more crime may take place

Whoever did the planning application failed to get a survey

They were advised on 23rd November about badgers and its recorded http://www.queensparkcrewe.com/2015/11/paths-are-under-way.html.

The environmental officer was told again in January and its recorded http://www.queensparkcrewe.com/2016/01/have-cec-illegally-killed-badgers.html

A unqualified person then checked he proved he is unqualified as he thought it was rabbits. He took no action and didn't order a survey or stop work in the area.

The environmental officer was informed last week that a criminal act was taking place and he took no action to immediately stop it.

The contactors were also informed and refused to take action.

George Broughton was told and could have taken action but didnt instead of ringing and stopping work he took his time coming to the park.

Having established there were badgers active no one ordered a survey or took any action to ensure their safety or tried to obtain a licence as is required.

Work is going on in other areas and more criminal acts may take place if a survey isnt taken and worked stopped until its declared safe.

The Police are investigating it as a criminal wildlife crime.

Starting on site in November 2015, a long awaited project is being delivered to renew the pathways around Queens Park. This is one of the final elements of the whole park restoration that the council have been working on in partnership with our Friends Group. The plans received both Planning Consent and Listed Building Consent. At the time of the project planning, badgers were not known to be present in the park. There were plenty of visible animal excavations but this was thought to be by rabbits. The first indication that badgers might be present was reported on 1st February 2016. On immediate inspection there was no evidence observed of Badger activity.

This is total incompetence first badger have been in the park for years and all staff know about them pity management dont. Rabbit and badger hole are totally different so again its something they should know. Have been advised they should then have called and ecologist to check if you think a sett is unused you have to prove it normally by using cameras over a 3 week period. If badgers are present then a ecological survey needs to be done and planning shouldnt have pasted it until its done. They would have then had to apply for a licence which wouldnt be issued as its breeding season

Following a further report by a member of the Friends of Queens Park, the site was revisited on 14th March 2016.  This time evidence was found of badger activity in the vicinity of our path works. There was a marked change in the scale of the diggings in two holes; one was obviously more active than the other.  This time signs were very different observing badger paw prints and found badger hair making this pretty conclusive evidence. This evidence was not apparent when visiting the same location six weeks ago.

However, whilst there has been some path work close to the sett, there has been no path associated excavation activity near the holes under the shrubbery where these holes are located. The holes are located at the base of large Holly trees within the shrubbery, the entrances being directly under the roots of the trees into the higher part of the bank on the park perimetre.

A badger sett can be 310 meters long so using heavy machinery in the area could collapse the sett in the breading season.

The path works undertaken are not impacting the shrubbery. The path construction works entailed the old path surface being scraped in preparation for relaying. This was on the surface but not impacting below the existing ground level. The level of the new path was being raised up from that existing base ready for a new more DDA compliant path being laid out over the top. The construction contractors stockpiled the sub-soil / clay required for the reprofiling work in the vicinity of the shrubbery edge but did not cover the entrance of these holes which are behind the shrubs. This sub-soil has now been removed and used under the new path, the new path edges have been tidied up using topsoil which has been hand raked into position and has now been seeded with grass-seed to the edge of the shrubbery.

So they admit they dumped tons of hard clay using a heavy dump truck which actually covered and entrance which was the main one thats why the others didnt show signs of use until they blocked the main one, the heavy dump truck would disturb breeding badgers and could collapse the sett. As the sett could be 310 meters then the path could effect it and a licence was required

The entrance to the sett is located beneath the evergreen shrubs. The path edge is beyond the left hand edge of the photograph. The extent of the badger spoil can be seen at the top of the shadow. What is visible is the adjacent new topsoil that has been spread along the edge of the path. This topsoil is being seeded with grass-seed.

During the planning of this project badgers were not considered as a risk as they were not known to be in the park. As soon as their potential presence was suggested officers immediately went to investigate and found nothing to suggest disturbance to the badger sett. The method of construction of the new path has not required any excavation close to the badger holes so the only disturbance has been vehicle movements along the path which , given the proximity of the perimeter road, disturbance would be minimal . Whilst soil has been deposited close to the holes, the impact of this is negligible and now at an end.

I did call Mr Wright on Monday prior to visiting the park. At the scene I spoke to some of the contractors who were spreading top-soil with rakes in the vicinity of the badger holes.

The path work in that area is now complete so there will not be any further chance of disturbance from this project. The Badger holes are now being monitored to check that the badgers remain undisturbed.

The advice on working close to a Badger Sett is found https://www.gov.uk/guidance/badgers-protection-surveys-and-licences . The guidance states:

You usually won’t need a licence to do the following if it’s unlikely to disturb a badger in its sett:

The Council takes its responsibilities for protecting wildlife very seriously and we are satisfied that our actions on this project have not exceeded what is permitted.  The presence of badgers will now be factored into any future projects in Queens Park.

He has highlighted the rules and yes you can work with hand tools within the area only when you apply for a licence and are then advised its not needed. Before telling lies one should first check there isnt video , photos and witness to the fact they used a digger and he admits they used a dump truck to dump tones of heavy clay within a foot of the sett which makes it a wildlife crime and it has been reported to the Police as such. Having found there were badgers they were duty bound to get a ecologist and not some random worker who cant tell a rabbit hole from a badger sett. They should then have told contractors to not use heavy machines within at least 20ft ( contractors claim they were never told about badgers)

There was no reason whatsoever to use a digger to spread soil near badgers it could have been done within the law and used a wheel barrow or even left it until the breeding season is over.

The new paths will allow the whole community to enjoy the diverse wildlife found in Queens Park. 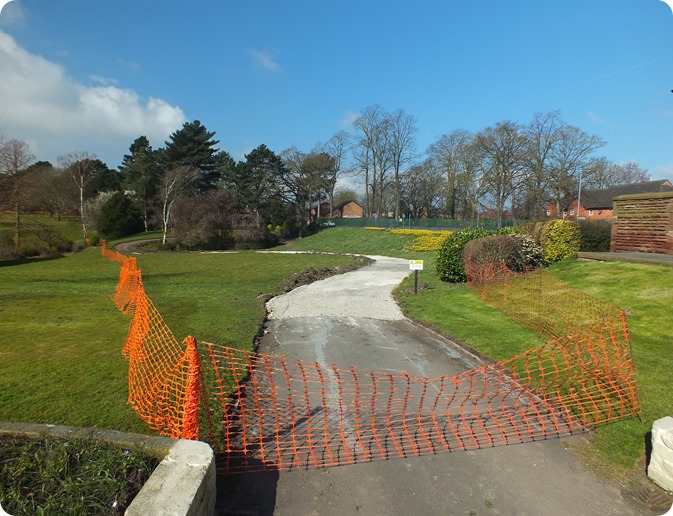 Below the one final path to be finished by the bandstand 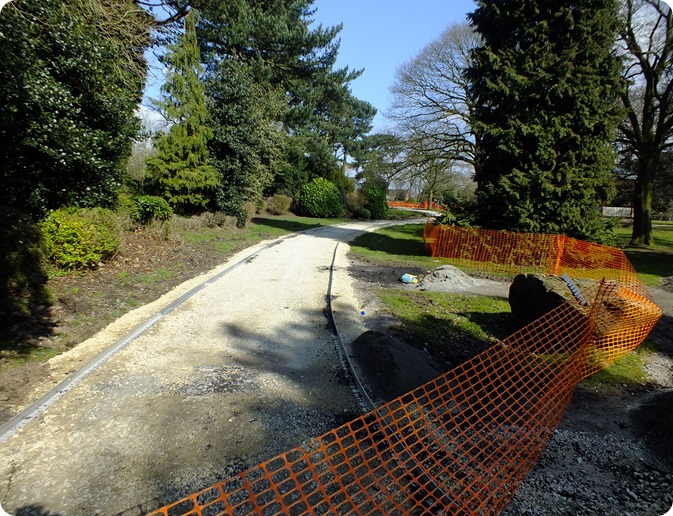 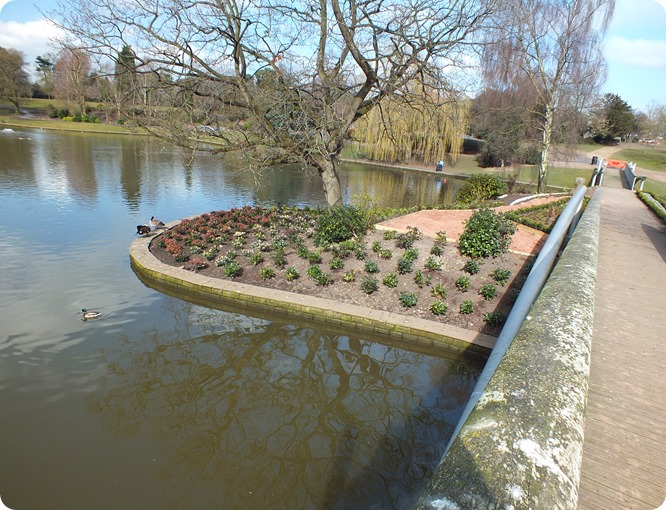 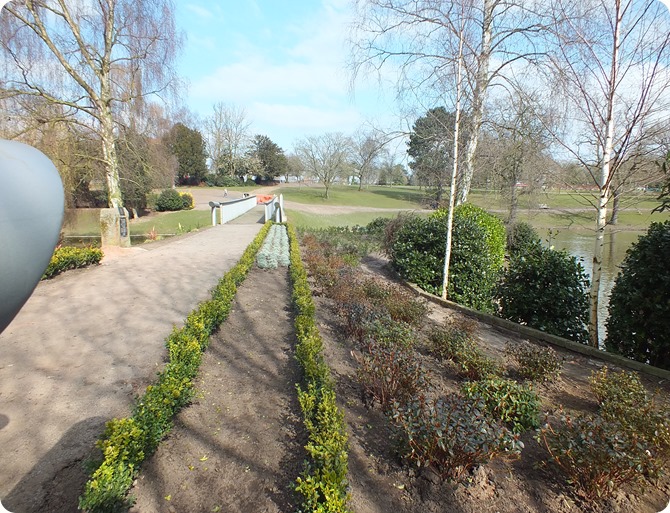 We still have a sand pit 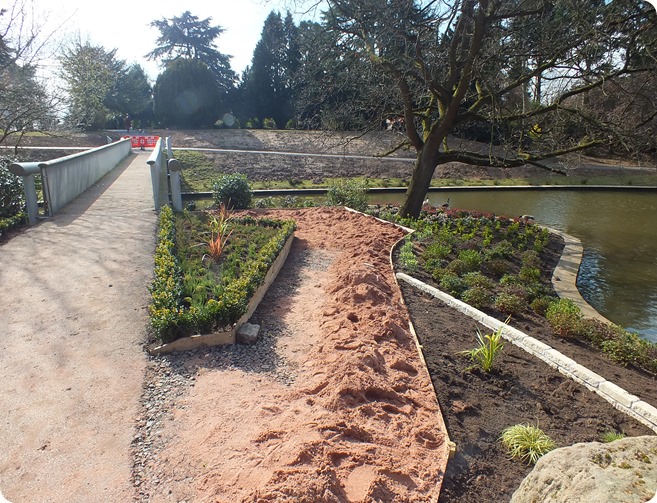