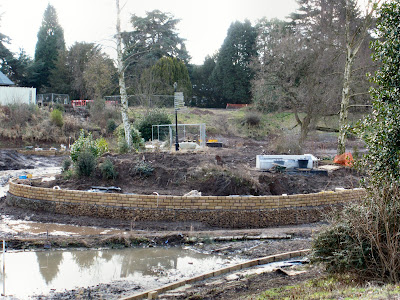 The second landmark bridge is to be installed at the historic Victorian, Queens Park, in Crewe next week.

The bridge is 14.5 metres long and is supported by tubular steel with timber beams, decking walkway and handrails.

Last month the very first bridge, Tipkinder, was installed to a fanfare of media and public attention and Coronation Bridge is promised to be even more impressive.

The media are invited to witness this historic installation on Wednesday, February 17 from 12 noon. The installation is expected to last throughout the afternoon. Please come to the Tipkinder entrance off Queens Park Drive.

Members of the public are also being encouraged to come along and witness history before their eyes. For those who want to get a close-up view please call the park manager, Elaine Dodd, on 01270 537896 so she can arrange a public viewing area.

Works:
To allow these extensive works to be carried out, around two thirds of the park have been closed off to the public, but it’s hoped that three quarters of the park will have been re-opened by the end of the year.
Other works in the pipeline include a planning application for replacement buildings, the largest of which is the new pavilion to replace the Jubilee Cafeteria built in the 1970s.

Councillor Roy Cartlidge, of the Crewe West Ward, who has supported the project throughout, added, “The installation of the main bridges will be a significant part of the Park’s history and are intended to last the next hundred years and beyond. “
Posted by Jan Wright at 10:56 PM