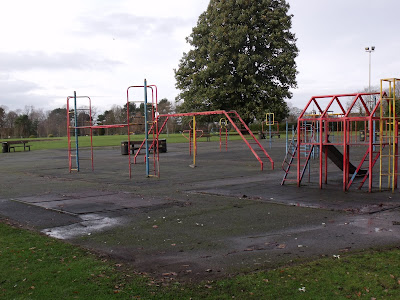 The meeting was poorly attended maybe the dark cold night had something to do with it.

It was an interesting meeting with presentations by Lost Arts who are doing the Bandstand. We were shown the new design for the Cafe and Bowling club. Its hoped this can go before planning before Xmas and then tenders can be sought in the new year with work starting in March time.

One exiting piece of news is that the play area has been brought forward due to complaints and the horse and spider falling apart. Designed by children it will be divided into two areas one for very young children and one for older children. Its hoped it will be ready for easter next year so thats good new all round and it shows the council do take notice of people.

Its still hoped that the lake will be finished by March next year and open to the public at long last but some paths will have to be closed in the future for new paths to go in.
Chairmans report

Lake and Bridge Works (Tolent Construction)
Tolent have been on site for 11 wks following acceptance of their tender.
There has been a 6 day delay due to bad weather.
The Tolent site will close at Xmas from 18th Dec for 2 wks.
Works have focused on lake edges and islands plus preparations for bridge abutments and foundations etc.

The Inlet Bridge at the Tipkinder end of the lake is the first bridge to go in and it will arrive on site Tue / Wed next week, preparation works are ongoing.

All Lake Inlet walls have been repaired and repointed.
Gabion baskets all around the Burma Star Island to be faced with stone blocks. A stone sample has been agreed.

East and West Island walls have been completed but may be raised to allow fluctuations in water levels.
Works to modify bridge abutments are underway.

Broadwalk Bridge works on site for 3 days next week. This will be the last and largest bridge to be positioned estimate end of Feb. Footpath links will need to go in to facilitate all bridges.
Coronation Bridge - Completion is expected by the end of January - together with Burma Star Bridge.

BANDSTAND
Slight slippage of works largely due to discoveries on site and additional higher quality finishes which have been agreed. Matching of sandstone to closely match the original has been very successful.
A detailed update and explanation of how these structures are restored will be given by Domenic of Lost Art. The completion date will now be end of January 2010.
NB. Ian will be providing a detailed update on the Lake and Bridge works and progress with the bandstand.

PLAYGROUND
Rocking horse and spider's web removed due to safety implications see above.
An exciting consultation took place involving the Sir William Stanier Community School and their feeder school's i.e. children talking to younger children. The selection and design process is well underway. Additional monies via ex Mayor will be allocated specifically for the disabled element. A contractor will be selected early spring2010.

COUNTY LANDSCAPES
Curved railings are to be completed early in the New Year and the Gates will be the very last item due to heavy construction vehicles accessing the park to install the bridges.